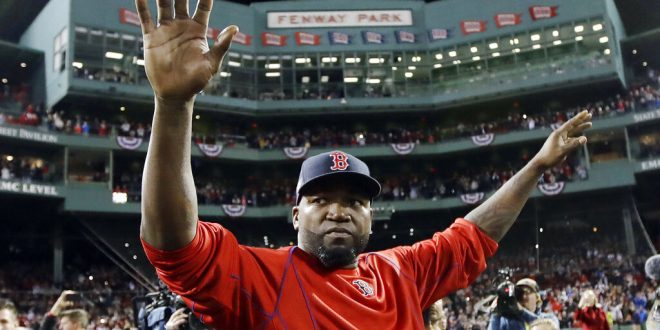 FILE - In this Oct. 10, 2016, file photo, Boston Red Sox's David Ortiz waves from the field at Fenway Park after Game 3 of baseball's American League Division Series against the Cleveland Indians in Boston. Ortiz returned to Boston for medical care after being shot in a bar Sunday, June 9, 2019, in his native Dominican Republic. (AP Photo/Charles Krupa, File)

MLB Shows Support for David Ortiz After Being Shot in D.R.

Red Sox legend David Ortiz was shot at a bar in the Dominican Republic on Sunday, June 9th. After spending the night at the hospital in Santo Domingo, he flew to Boston the following evening for a second surgery.

The flight was chartered by the Boston Red Sox organization and Ortiz is still in recovery. The 10-time All-Star is an icon not just in Boston, but all over the baseball community. Current and retired players have reacted to the Ortiz incident and have sent their love and support that includes former teammate and Dominican native, Pedro Martinez.

A Legend On and Off the Field

Ortiz was part of three championship teams with Boston in 2004, 2007, and 2013. He has countless of clutch moments in the playoffs including ending the Red Sox 86 year World Series drought. Even with all the accolades he received as a player, many recognize Ortiz for his charitable work off the field.

The MLB community has shown their appreciation to Ortiz as they held a moment of silence prior to the MLB games on Monday. The Red Sox did play on Monday against the Texas Rangers and fans at Fenway Park showed up for No. 34.

David Ortiz has taken his first steps at a Boston hospital after undergoing multiple surgeries this week https://t.co/JI1GH8xDmL

David Ortiz is recovering at Boston’s Massachusetts General Hospital. Since the second surgery, he has been resting and has already taken his first few steps.

The MLB community has rallied behind Ortiz and his family and they all will be kept in their thoughts and prayers throughout the recovery.