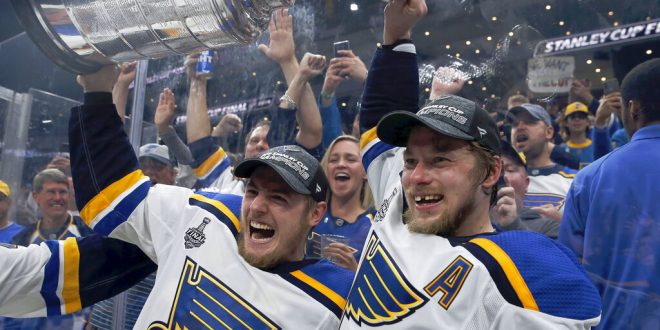 St. Louis Blues' Ivan Barbashev, left, and Vladimir Tarasenko, both of Russia, hold the Stanley Cup as fans in the stands celebrate after the Blues defeated the Boston Bruins in Game 7 of the NHL Stanley Cup Final, Wednesday, June 12, 2019, in Boston. (AP Photo/Michael Dwyer)

Started from the Bottom

From the bottom of the league in January to now Stanley Cup Champions, the St. Louis Blues have won their first ever title in franchise history.

A 4-1 victory over the Bruins in Boston last night finally ended the drought that has lasted all 52 years of the Blues’ history. Before last night, the Blues were the oldest NHL team to have never won a Stanley Cup. Although, they’ve made it to the Finals three times before – in 1968, 1969 and 1970.

They’ve even made it to the playoffs 41 times out of their 51 seasons. The last time the Blues made it to the Finals in 1970, they were ironically swept by the Boston Bruins. Almost 50 years later, the Blues have gotten their revenge.

The first Final Game 7 home game in Bruins history was a let down for Boston. The Bruins had home ice as well as Conn Smythe favorite Tuukka Rask on its side. Barricades boarded Causeway street and fans exploded inside the arena when the Bruins came out for warmups.

The Blues hopped to a 2-0 lead in the first period with goals from Ryan O’Reilly and captain Alex Pietrangelo. No one scored until midway through the third period, when Blues forward Brayden Schenn added to their lead. Zach Sanford iced the game and made it 4-0 with under five minutes remaining. The Blues held the shutout until Bruins defenseman Matt Grzelcyk, who returned from a four-game absence due to a concussion, scored Bruins’ lone goal late in the final period.

Ryan O’Reilly scored for the fourth consecutive game, making him the first player to score a goal in four straight Stanley Cup Finals games since Wayne Gretzky in 1985. He was given the Conn Smythe Trophy as the MVP of the playoffs.

O’Reilly was at a loss for words after delivering the city’s first Stanley Cup.

St. Louis Blues rookie goaltender Jordan Binnington kept the Bruins off the scoreboard with a series of remarkable saves. He had 12 saves in the opening frame alone and finished the game with 32 stops and a .970 save average.

For #Game7, @binnnasty pulled out ALL the stops… literally. #StanleyCup pic.twitter.com/HdOJiivsNq

Previous NFL Quarterback Roundup
Next NBA Finals Game 6: Do Raptors Win Their First Ever Title? Or Do Warriors Force A Game 7?

The Tampa Bay Lightning are facing the Dallas Stars at 9:30 p.m. on ESPN with …