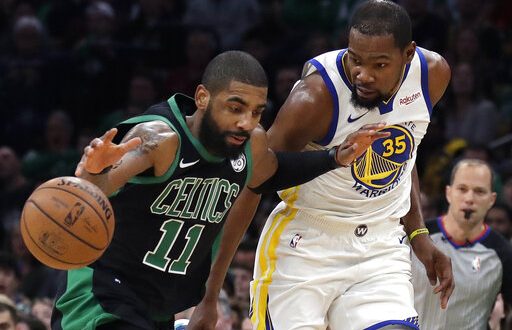 The highly-anticipated NBA Free Agency period didn’t disappoint. Several big-name players are on the move. Many faces going to new places. With 40 percent of the league’s players hitting the open market, a ton of movement was a given.

Many believed Celtics guard Kyrie Irving and Warriors forward Kevin Durant were “Big Apple” bound. They are heading to New York, but not to the Knicks. Durant and Irving agreed to sign with the Brooklyn Nets. Both of them did so early in free agency. The two All-Stars even agreed to take less than the max. This allowed the Nets pay center De’Andre Jordan. The two agreed to a four-year/$40 million deal.

If Durant to the Knicks appeared to be a done deal, what happened? ESPN reports Knicks owner James Dolan was hesitant on giving Durant the max after his Achilles injury, which he suffered in the NBA Finals back in June.

The Knicks and owner Jim Dolan were not prepared to offer Kevin Durant a full max contract due to concerns over his recovery from the Achilles injury, league sources tell me and @wojespn. Knicks officials are in Los Angeles tonight, meeting with free agents such as Julius Randle.

The Knicks have released a statement from team president Steve Mills in the wake of missing out on Kevin Durant and Kyrie Irving: pic.twitter.com/z4yKVILSqi

After a long flirtation period, the Miami Heat and Philadelphia 76ers guard Jimmy Butler made things official. Butler met with Miami officials Sunday to state his desire to play for the Heat. Miami was one of Butler’s preferred destinations when Minnesota was trying to trade him back in November.

The Heat are well over the salary cap and couldn’t sign Butler themselves. Therefore, the Heat and 76ers had to work out a sign-and-trade. Miami plans on sending guard Josh Richardson to Philadelphia. It appeared that Miami was going to trade point guard Goran Dragic to the Dallas Mavericks. However, reports say the deal was scrapped. Instead, Dallas wanted forwards Kelly Olynyk and Derrick Jones Jr., but Miami didn’t agree.

The Mavericks had interest in acquiring Goran Dragic in the three-team trade construction with Miami & Philly, but “they changed course,” his agent Bill Duffy tells ESPN. “In analyzing it, his salary was too high based on other things they’re trying to do.”

The Heat want to shed Dragic’s salary to make room for Butler. Despite the setback, many believe the deal will get done. Butler plans on signing a four-year/$141 million deal.

A former Gator is changing sides in a bitter Eastern Conference rivalry. After three seasons with the Boston Celtics, forward Al Horford agreed to a four-year/$109 million contract with the Philadelphia 76ers. With this addition, the Sixers now have a strong frontcourt duo with All-Star center Joel Embiid.

The Sixers were one of the more active teams on the first day of free agency. They locked up forward Tobias Harris to a five-year/$180 million contract.

With the loss of Kevin Durant, the Golden State Warriors made some major shakeups to their roster. They agreed to trade forward Andre Iguodala to the Memphis Grizzlies. The deal gave the Warriors salary cap flexibility. This allowed them to complete a sign-and-trade with the Brooklyn Nets. Point guard D’Angelo Russell is now heading to the Bay Area. Russell agreed to a four-year/$117 million dollar deal.

The Celtics found their replacement for Kyrie Irving in the form of Hornets point guard Kemba Walker. Walker and the Celtics agreed to a four-year/$141 million dollar deal. This evolved into a sign-and-trade between the two teams. The deal includes sending point guard Terry Rozier from Boston to Charlotte.