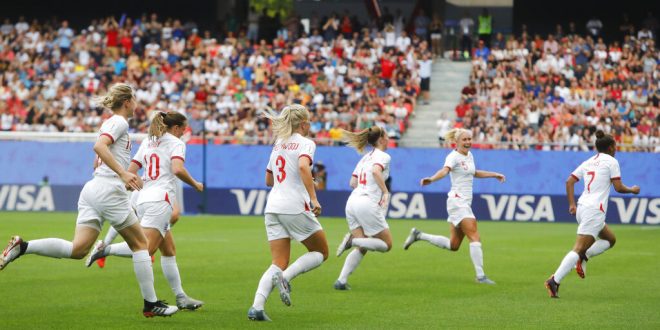 England's Alex Greenwood celebrates with her teammates after scoring her side's 3rd goal during the Women's World Cup round of 16 soccer match between England and Cameroon at the Stade du Hainaut stadium in Valenciennes, France, Sunday, June 23, 2019. (AP Photo/Michel Spingler)

Norway Faces England in Replay of 2015 WWC Round of 16

Today, at 3 p.m., the quarterfinals of the 2019 Women’s World Cup in France kicks off. Norway and England will face each other, just as they did in 2015. In Canada, England got the better of Norway, coming back from a goal down to win 2-1.

England’s Path to the Quarters

The Lionesses competed in Group D alongside Japan, Scotland and Argentina. England finished on top with a perfect 3-0 record, beating Scotland 2-1, Argentina 1-0, and Japan 2-0.

In the round of 16, England faced off against a Cinderella team in Cameroon. Although the game finished 3-0 in favor of the Europeans, the game could’ve went very differently had certain calls been different.

Ellen White has scored four of England’s eight goals in the tournament in just three games, averaging a goal every 61 minutes. Prior to the game against Cameroon, she had scored three of England’s five.

Although the striker is right-footed, she’s scored all four goals with her left.

In the midfield, Phil Neville has deployed Jill Scott in every game. He has rotated much of the squad, but Scott is just too important for this England side.

Congratulations to @JillScottJS8, who is now @England's leading appearance-maker at a World Cup with 18, surpassing former #ThreeLions goalkeeper @Peter_Shilton. pic.twitter.com/ypdfzHpljz

She’s a tremendous box-to-box midfielder that helps the Lionesses build attacks, oftentimes ending up in the box with a chance at the end. Although she hasn’t scored yet, and probably could’ve had three or four, Scott is a vital part of the squad.

Steph Houghton and Lucy Bronze have also started all four games for England. The center back and right back pairing took part in the game against Norway in 2015, scoring the two goals to help them advance.

Houghton has made 109 appearances for England. Bronze has 72 caps.

Norway’s Path to the Quarters

Norway finished second in Group A behind hosts France. On Matchday 1, they defeated Nigeria 3-0, then lost to France 2-1. They solidified their spot in the next round of play with a 2-1 win against South Korea.

In the round of 16, Norway faced Sam Kerr and Australia. Somewhat surprisingly, the Norwegians passed the test and defeated the Aussies on penalties after a 1-1 draw in regular time.

The front line is led by 31-year-old Isabell Herlovsen. The striker has 62 goals in 130 appearances for her country. So far in France, she has played all four games and scored two goals.

Someone who can play in several positions, Caroline Graham Hansen poses a threat to any defense going forward. The 24-year-old has 26 goals in 76 caps for Norway and has a goal and assist to her name in the tournament in four matches.

In those four matches, she’s taken 14 shots. The No. 10 is always looking to score herself or craft a chance for her teammates.

Norway is led at the back by the defensive pairing of Maren Mjelde and Maria Thorisdottir. Both have played all four games in the tournament and play their club soccer at Chelsea.

Mjelde is the more experienced of the two at 29 years old, having made 140 caps for her country. Thorisdottir, at 26, has made 36 appearances.

Both defenders played in the 2015 match and will want to get one back against the Lionesses this time around.

Norway and England will kick off in the Stade Océane at 3 p.m.