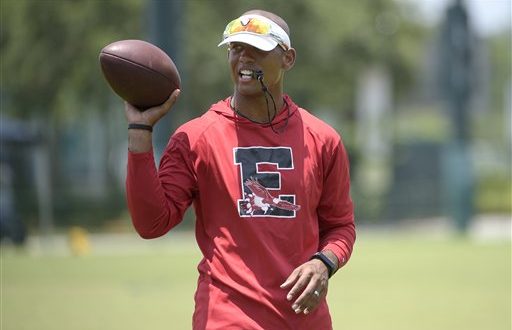 Former Gator quarterback Chris Leak joined Sportscene with Steve Russell and Shane Matthews on Tuesday. They discussed a multitude of topics. Some of the items discussed included his relationship with Dan Mullen, who was an assistant on the 2006 national championship team, and the state of the Gators heading into the 2019 season. Leak was recently hired to work as a football head coach for Edgewater High School in Orlando.

In an interview, Leak talks about the connection he had with coach Dan Mullen. He mentions that Mullen has grown a lot and that his reputation of preparing quarterbacks just keeps getting better.

“He really connects you with the position emotionally… You really have a focus and a purpose.”

Said Leak when asked about what stood out the most about Mullen’s way of training his team.

He also talks about the adjustments he made to fit Mullen’s vision and expectations for quarterbacks.

One of the most important things in Leak’s relationship with Mullen was the strong communication they developed. Leak says that was when he started connecting with Dan Mullen’s strategies.

“We had those tough conversations as a player-coach relationship needs.”

Leak also talks about the pressure that comes with being a quarterback for the University of Florida.

As he mentioned, it takes time for quarterbacks to get used to new strategies. But the former Gator quarterback believes that Feleipe has shown progress and that time will only make him get better.

He also believes that Feleipe is handling the pressure of being a quarterback pretty well.

Leak mentions that one of the most important things in a team, is the comfort of the player. He believes that if the quarterback is confident of a play, he will make sure the play is successful.

He emphasizes the importance of the communication between the quarterback and the coaches when discussing plays.

Leak is confident that the Gators will be using these strategies for this next season. He believes that people will notice this progress on the field.

Because he was offered a scholarship for football as early as in middle school, Leak believes that he has what it takes to training young players. He is now spending his days in Orlando helping quarterbacks improve their passing game and their efficiency.

Leak also gave his opinion on the transfer portal. He believes that if a player feels like they can receive a good education while playing at a certain university, then there is nothing wrong with the transfer.

Camila is a senior at the University of Florida, who served as a beat writer for the women's basketball team from 2019 until the 2021 season. She was also a beat writer for the Gators football team during the 2020 season. Camila is also WUFT's news director as well as a sports reporter/anchor.
@CamilaMaffuz
Previous Dodgers Lead the Charge in the National League Pennant Race
Next Thunder Trade Westbrook to the Rockets