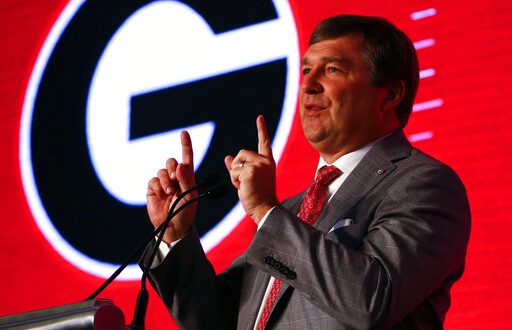 The Georgia Bulldogs enter the 2019 season in the same position they’ve been in for the last two years. Good, but not good enough. Despite blowing the SEC Championship Game to Alabama in December, the Bulldogs remain one of the top teams in the country. However, they still have the crushing defeat at the hands of the Crimson Tide weighing them down. At SEC Media Days on Tuesday, Georgia head coach Kirby Smart addressed how his team will respond in 2019.

Georgia held a strong 28-14 lead going into the final minutes of the third quarter of the SEC title game. Many believed Georgia had Alabama right where they wanted them. On the contrary, Alabama had Georgia right where they wanted them. The Tide rolled back to score 21 unanswered points and win 35-28. Even though the Crimson Tide don’t appear on Georgia’s regular season schedule, they’re the opponent Georgia is measured against.

Kirby Smart said the next step his team needs to take to beat Alabama is the first game of the 2019 season.

“There’s learning experience all across the board,” Smart said about his team using the loss to Alabama as motivation. He referenced the poor performance against Texas in the Allstate Sugar Bowl and the beatdown in Baton Rouge against LSU as games his team can learn from.

Once again, the Bulldogs are all bark and all bite. Georgia is loaded on both sides of the ball, making them one of the favorites for the College Football Playoff. Offensively, Georgia will be led in the backfield by quarterback Jake Fromm and running back D’Andre Swift. These two were catalysts for Georgia’s offensive attack a year ago.

The question for Georgia on offense has to be the lack of experience of the receivers. The most impressive aspect of Georgia’s offense is the return of four out of five starters on the offensive line. The argument can be made that Georgia has the best offensive line in the country.

The trenches for Georgia appear to be the backbone for this team. Just like on the offensive line, the defensive line returns a ton experience. Six seniors return on the line, led by defensive tackle Tyler Clark. Sophomore Tyler Davis has also proved himself to be a force on the line. The strength of the defense remains the secondary, led by safety J.R. Reed. The question mark on the defensive side remains at outside linebacker. However, Georgia is loaded with young talent so it’s just a question of the unknown.

During the offseason in Athens, there has been a lot of chatter about one of Georgia’s biggest rivals, the Florida Gators. To start, at the SEC Spring Meetings in Destin, Kirby Smart expressed interest in possibly moving the annual Florida-Georgia game away from Jacksonville. He wants to bring the game to each respective campus on an alternating basis.

In addition to relocation talks, there have been a lot of trash talking, more so than in previous years, on both sides leading up to their meeting in Jacksonville on Nov. 2.

Smart addressed both of these issues at SEC Media Days.