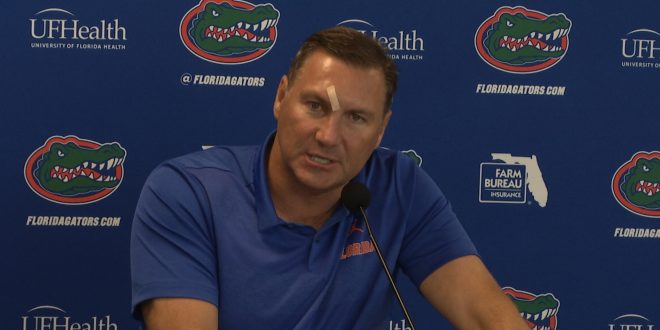 With the start of college football season less than a month away, Florida Gators head coach Dan Mullen took to the podium to answer questions about his team at Florida’s Media Day.

After Thursday’s Media Day, the Gators get back to work this weekend with their first full practices as the team prepares for their season opener against the Miami Hurricanes. Mullen will have a lot to prove as the Gators look to improve on their 10-win season a year ago and get back into national title contention.

One thing Mullen is excited for is the familiarity he has with the team. In his Media Day press conference, he mentions that the players know what the coaches are expecting and how this will reflect in practices and the games.

Mullen will look to focus on the minor details that make a big difference in the game; third down conversions, limiting penalties on both sides of the ball, etc. He recognizes the fact that this 10-win team from a season ago had the ability to be even better while also admitting the team had plenty of mishaps.

With star power on both sides of the ball, this is a team that’s ready to compete with the best in the country. Led by quarterback Feleipe Franks, the offense will look to take another step in Mullen’s second year. Franks will have a slew of receivers returning to his disposal as the passing game could be the focal point of this Florida offense.

Concerns on the roster

Football games can be won and lost in the trenches. Unfortunately for the Gators, they only return one offensive line starter from a year ago, center Nick Buchanan.

Florida has a talented backfield as they look to deploy the trio of Lamical Perine, Dameon Pierce and Malik Davis along with Kadarius Toney every now and then. For the ground game to take off, the Gators will need consistent play from the guys up front.

When it’s all said and done, the Gators could have the most lockdown corners in the country. But outside potential top 10 pick C.J. Henderson, there are a few questions marks. Marco Wilson is coming off a torn ACL, Trey Dean is still young and still has room for improvement and the Gators lost top recruit Chris Steele to the transfer portal.

With the path to success laid out for this football team, it’s about putting it all together. They got the offense, defense, special teams and especially coaching staff to make a run at a title. With high expectations looming around the Gators, only time will tell as college football is just right around the corner.