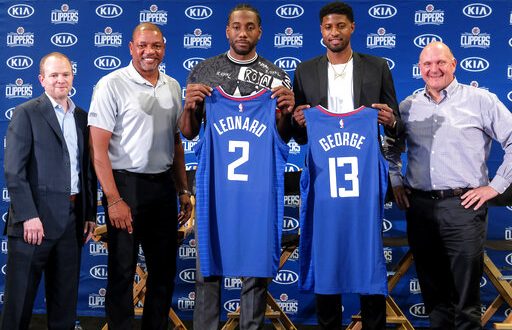 Leonard and George Ready to Lead Clippers in 2019

The Los Angeles Clippers stole the show in the 2019 NBA offseason. A week after free agency started, the NBA heard the news that Kawhi Leonard signed with the Clippers. What was more of a surprise was on the same night, the Clippers traded for Oklahoma City small forward Paul George. It has been almost a month since that news broke out but yesterday both players spoke to the media in Los Angeles. They were accompanied by Clippers owner Steve Ballmer and head coach Doc Rivers. Ballmer was excited to unveil their uniforms and believes the Clippers can be the premier team in the Staples Center.

Leonard to Play for LA (Clippers)

After coming off a historic playoff/title run with the Toronto Raptors, Kawhi Leonard decided to sign with the Clippers. Many expected Leonard to choose the Lakers over the Clippers since they already had LeBron James and Anthony Davis in purple and gold. It was a tough decision for Leonard to choose which LA team he wanted to play for. He ultimately thought the Clippers were a better fit for his style of play.

Leonard and George joining forces with the Clippers instantly brings attention to the new in-city rivalry with the Lakers. All eyes will be on both teams throughout the season. It is also expected that both teams will be seeing one another in the Western Conference Finals.

Kawhi signing with the Clippers has created a huge domino effect on where free agents were going to sign. The era of super teams has shifted into more teams having one or two stars instead.

George Happy for a Fresh Start

Paul George recently signed a four-year deal with the Thunder. After completing just one year of that deal he was dealt to the Clippers. This move instantly makes the Clippers perimeter defense one of the best in the association. With Leonard, George and point guard Patrick Beverley, teams are going to have a hard time shooting threes. By playing on both sides of the ball, George believes he and Leonard have the abilities to bring a championship to the Clippers organization.

With championship head coach Doc Rivers at the helm, and the support of the front office, it is going to be an exciting time to be a basketball fan living in Los Angeles. 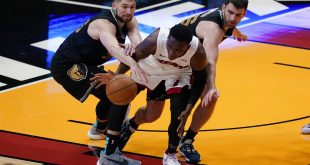 The Miami Heat have seen their fair share of ups and downs this season. At …