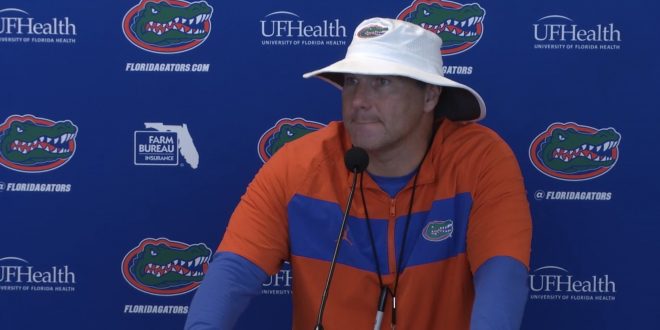 Mullen addressed the media on Monday after Florida’s fourth practice of fall camp. During the press conference, he gave updates on the state of the roster and on team leadership.

Mullen stressed the importance of his offensive line first. He said he is confident in the players he has, but he is worried about Florida’s o-line depth.

“My uncertainty on the offensive line is depth,” he said. “If we can stay healthy I think we’ll be ok…Everybody gets the same reps. Part of that is for player development…The difference between last year’s starters on the o-line and this year’s starters that were backups last year is the number of game reps they’ve had had. They’ve had a lot of practice reps.”

Going off of the strength of his o-line, Mullen also talked about team physicality.

He noted the importance of being a physical football team. Mullen also added he wants everyone to know they played a tough Florida team after each game this season.

“We’re pretty physical,” he said. “We get after it with guys. We’re not physical just to be physical; we’re making sure we’re physical to teach, and execute and improve that way. If you play us, I want you to know after the game that you played us.”

The physical nature of Mullen’s team was a big reason for Florida’s improvement during the coach’s first year. Hitting the ground early and often and prioritizing o-line performance are evidence of Mullen’s physical philosophy.

#Gators coach Dan Mullen, ‘We’re pretty physical, we’ll get after it with guys,’ said there’s ‘a fine line’ tho once pads go on Tuesday.

Dan Mullen had special praise for senior running back Lamical Perine on Monday. During his lauding of the Gators’ lead back, he expressed the importance of Perine’s versatility.

“He’s got great vision,” he said. “(Perine) can play physical; he has good speed; he catches the ball well.”

Even though Mullen wasn’t the one who recruited Perine back in 2015, the Gators coach is happy he’s benefiting from Perine’s decision to play for Florida.

“I’m glad he came here, though,” Mullen said. “Worked out good for me.”

Lamical Perine led the #Gators in rushing last season, but there is an opportunity for increased usage and increased production in 2019.

a look at what are reasonable projections https://t.co/tcyxatq3op

The Gators will open up Tuesday’s practice in pads. It will be the first time Florida players have suited up in full pads since the 2019 Orange and Blue spring game.