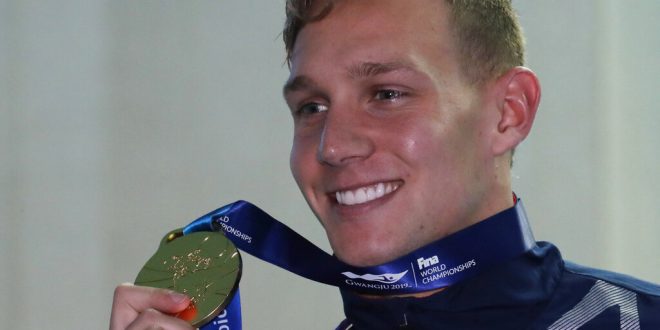 The World Swimming Championships wrapped up Sunday in South Korea. The event is the second most prominent swim meet on the planet, behind the Olympics.

Dressel won eight medals at the competition. He claimed six golds, including three in one night, in a historic performance that set the record for most medals at a single world championships.

The previous benchmark was seven, originally set by Michael Phelps in 2007.

Dressel was named best male swimmer at the meet, in which the US took home 14 golds, the most of any team.

Dressel tied Phelps’ medal record at the 2017 world championships in Hungary, but his dominant showing in South Korea was good enough to set the new standard.

This is the final major swimming event until the Tokyo Olympics in 2020.

Dressel is only one year removed from graduating from the University of Florida. He is the most decorated swimmer in school history, having won ten individual SEC championships.

He won three SEC Male Swimmer of the Year awards and helped Florida win four straight SEC titles in his tenure at the school from 2015-2019.

While he was a student, he competed at the 2016 Olympics in Brazil. He won two gold medals, coming first place in the 4 x 100 freestyle and 4 x 100 medley relay.

I'm a senior journalism student at Florida. I love sports, and I love covering sports. I'm one of the beat writers for the Gator soccer team right now, and if you follow me on Twitter @johnmiceli13 you'll never miss a soccer update
Previous Several Gator Track Stars Qualify for World Championship
Next Mullen Gives Early Update on Fall Camp