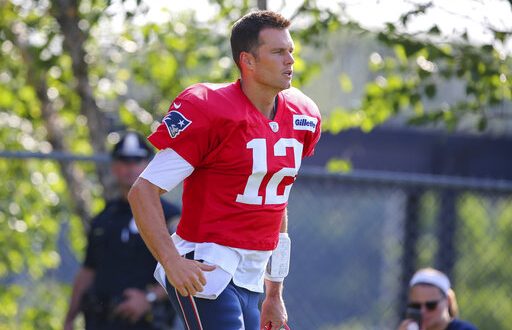 The landscape of the NFL has changed tremendously over the past 20 years. Teams rise to prominence, only to fall just as quickly. The constant for the past two decades has been the success of the New England Patriots. The Patriots have put together one of the greatest dynasties in professional sports. After six Super Bowl victories, including winning two out of the last three, the Patriots are poised to make another Super Bowl trip and repeat as champions.

Leading the way for the Patriots once again is quarterback Tom Brady. Despite being 42-years-old, Brady is still performing at a level we are accustomed to seeing. He remains one of the top signal callers in the league. Last year, Brady threw for 4,355 yards and 29 touchdowns. His maintained level of productivity while other quarterbacks would’ve been long retired has been remarkable to witness.

The secret for Brady’s sustained success has been staying in top physical shape.

What has helped Brady’s success on the field has been the production of one of his favorite targets, tight end Rob Gronkowski. With his bulky stature and quickness, Gronk repeatedly posed a mismatch for opponents. He was to big to be covered by a safety one-on-one and was to fast to be covered by a linebacker in coverage. Gronk was a key player in the Patriots’ 13-3 Super Bowl win over the Los Angeles Rams in February. He finished with six receptions for 87 yards.

The Patriots are going to miss that production this season. During the offseason, Gronkowski announced his retirement after nine seasons with the team. However, some believe Gronk might return to the team midseason. Despite these theories, the Patriots still have to find someone to step up in Gronk’s absence.

There have also been changes on the defensive side for the Patriots. Former defensive coordinator Brian Flores is now the head coach of the division rival Miami Dolphins. The Patriots didn’t hire a replacement for Flores to call the defense. Head coach Bill Belichick will take on more responsibilities on the defensive side. This allows the team to maintain the same system that has served them well throughout their dynasty.

Through the first few practices of training camp, Belichick is pleased with what he sees from his defense.

The Patriots are no strangers to being the defending champions. They’ve done so five times before, with the last time coming in 2017. Once again, the Patriots are one of the favorites to repeat and win the Lombardi Trophy again.

Belichick said the team is ready to repeat in 2019.