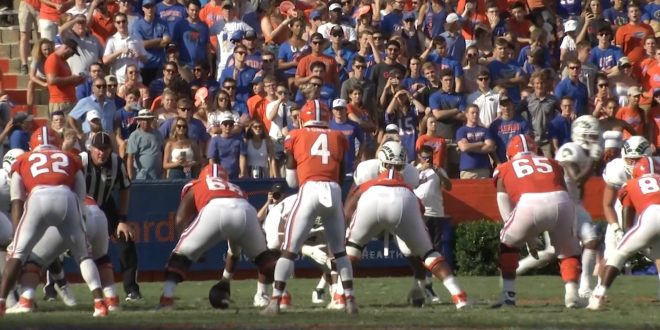 Kadarius Toney to Don No. 1 Jersey

“You’ve got to be a baller to be No. 1,” coach Dan Mullen said in the spring of 2018 when asked about its availability.

Now, it seems Kadarius Toney is ready to ball.

Toney was awarded the No. 1 jersey on offense, while junior cornerback CJ Henderson will wear it on defense in the coming Gator football season. This is the first time anyone has sported the number since Vernon Hargreaves III was the resident lockdown cornerback four years ago.

Of course, Percy Harvin’s legacy as an explosive offensive weapon who also wore No .1 is not lost on Toney.

“That’s a high caliber person,” said Toney, when asked about Harvin after practice on Saturday, “the things that he did for the Gators, and in the NFL, that was tremendous… to be in shoes like that, that’s big.”

Toney also had this to say about making the number his own:

Last season as a receiver, he caught 25 passes for 260 yards and a touchdown. He ran for 240 yards on 21 carries. He also featured on special teams, where he had six kick-off returns for 131 yards.

Most notably, though, may be his 20-yard pass touchdown he threw to Moral Stephens against Mississippi State.

His donning of the No. 1 jersey could indicate he is poised for a larger offensive role this season. Toney acknowledged he doesn’t know what his role will be, but he is prepared for anything.

“Whatever Mullen wants me to do,” he said Saturday, “if it’s play punter for a play, whatever. I’m willing to do whatever.”

Toney is sure of one thing, though. He feels he is a more complete receiver:

Talent and Experience at WR

Florida has four senior receivers on the roster: Van Jefferson, Tyrie Cleveland, Joshua Hammond, and Freddie Swain who will all feature on offense. Fellow junior Trevon Grimes is also expected to see ample play time. There are plenty of experienced players who could open up space for Toney, but having so many options also means a lot of mouths to feed. Toney is not concerned about the balance of touches, though.

“We’re not selfish at all, we’re for each other… we’re not self-centered, nobody is selfish on this team,” he said.

Toney also has nothing but love for his teammate sharing the No. 1 jersey with him on the Gators team this upcoming season.

On his relationship with the other Gator No. 1, CJ Henderson: “That’s my brother.”

I'm a senior journalism student at Florida. I love sports, and I love covering sports. I'm one of the beat writers for the Gator soccer team right now, and if you follow me on Twitter @johnmiceli13 you'll never miss a soccer update
Previous Russell Westbrook Excited to Reunite With James Harden
Next Outpouring of Support for Former Gator Neiron Ball