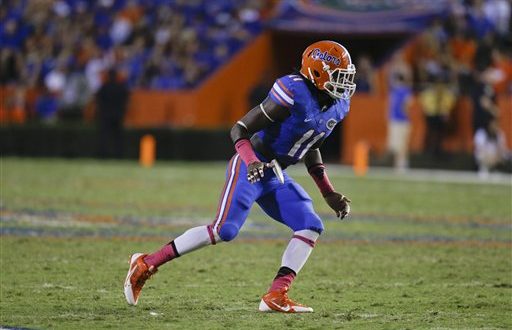 Former Gator linebacker Neiron Ball is synonymous with the word courage. During his time with the Gators, he sat out his entire sophomore season in 2011 due to a health condition. Ball’s diagnosis with an arteriovascular malformation condition sidelined him. Despite this, he was able to get back on the field and be a productive linebacker for the Gators. Ball was even given the team’s Chris Patrick Courage Award in 2013.

This award has new meaning to those who know what he’s going through. Ball is fighting for his life. His diagnosis of arteriovenous malformation (AVM) ended his football career. He suffered an aneurysm in September 2018. Now, Ball is a paraplegic. The entire football community, spanning from Gainesville to the entire country, is doing their best to support for Ball. A GoFundMe page to help Ball and his family has raised over $108,000, as of Wednesday morning.

As the song goes, “in all kinds of weather, we’ll all stick together.” That lyric couldn’t be more true when discussing the support for Neiron Ball from his Gator family. Several of Ball’s old teammates from Florida have donated to his GoFundMe page. Former Gators tight end Jordan Reed gave a $10,000 donation. Every donation matters to the Ball family because, according to the page, “his health insurance does not cover the appropriate care necessary to give him the best chance of recovery.”

Following the team’s training camp practice on Tuesday, Atlanta Falcons safety Keanu Neal, who played with Ball at Florida, discussed what the overwhelming support says about Ball. “[It] shows the type of person that he is, how much people respected him as a player and a person. And still do,” Neal said.

Neal talked about his personal connection with Ball.

He added that his former teammate is a fighter.

Atlanta Falcons head coach Dan Quinn had similar sentiments toward Ball. Quinn coached Ball at Florida as the team’s defensive coordinator from 2011-12. He said Ball, “is worthy of our support.”

Dan Quinn says last night he asked the #Falcons defense who their best teammates have been in their lives.

At Florida, “I’d imagine damn near half the team” would have named Neiron Ball as that teammate.

He says Ball is “worthy of our support.” pic.twitter.com/apXS8Ktuy8

#Falcons – HC Dan Quinn is asking for help bringing awareness to a former .@GatorsFB player he coached while he was at #UF. Neiron Ball was diagnosed in 2011 w/ a condition called Arteriovenous Malformation. #RiseUp #InBrotherhood #WSBTVsports #Gatorshttps://t.co/q6YlDVIWvb pic.twitter.com/92kytYdktO

If you want to donate to the cause, the link to the GoFundMe page can be found here.

Previous Kadarius Toney to Don No. 1 Jersey
Next Gator linebackers look to improve