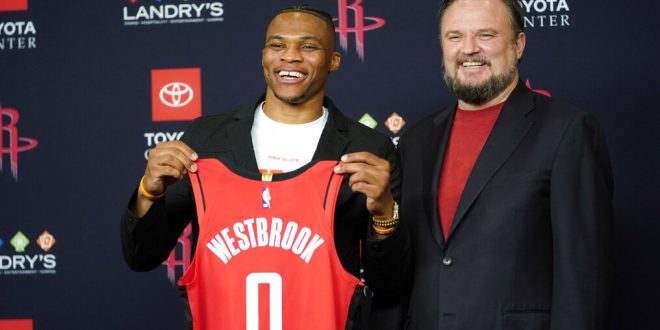 Russell Westbrook shared his excitement and ambitions during his introduction to the Houston Rockets. He spoke about his close and long relationship with once former teammate James Harden. The two, according to Westbrook, are excited to reunite and are ready to pursue a title.

The last time Westbrook and Harden shared the floor in the NBA was seven years ago. The two were wearing Oklahoma City’s blue, orange and white uniforms. The Miami Heat defeated the Thunder in five games of the 2012 NBA Championship. The closest each one of these heavyweights have gotten to lifting the Larry O’Brien Trophy.

Westbrook and Harden have become the face of their respective franchises since their separation. Some fear these two forces won’t work well together.

Westbrook’s ability to consistently drop triple-doubles over the last three seasons has shown his growth as a player and as a teammate. He recorded a regular season personal best 11.1 rebounds-per-game and 10.7 assists-per-game despite scoring 22.9 points-per-game.

Harden is a natural scorer. He averaged 25 points-per-game or more since his arrival at Houston in 2012. Furthermore, he just came out of his best scoring season averaging 36.1 points-per-game, but only averaged 6.2 assists-per-game. Nevertheless, Harden showed his ability to be a team player when he won the NBA assist leader award in 2017.

Westbrook is keen on playing alongside Harden again even if it means not having the ball as much as he’s used to.

Kawhi Leonard’s arrival to Los Angeles forced Sam Presti’s decision to trade Paul George to the Clippers. Westbrook needed a new home. This is when Morey and Stone got to work during their Vegas business trip and reached an agreement in only six days. Westbrook was all for the nail biting process.

On the other hand, Harden was impatient and even asked Morey why was it taking so long, according to the Houston Cronicle. Morey reminded him that his trade took five months to be sealed.

Figuring out a plan to make it big in the soccer scene in the U.S. or anywhere else in the world. For now, I'm having a blast writing for ESPN Gainesville and learning a lot from managers and students around the workplace. I'm covering the TV beat for Gators Soccer. What a team! Follow me on twitter: @J_AguerrevereUF
@@J_AguerrevereUF
Previous Rays visit Fenway for AL East showdown with Red Sox
Next Kadarius Toney to Don No. 1 Jersey