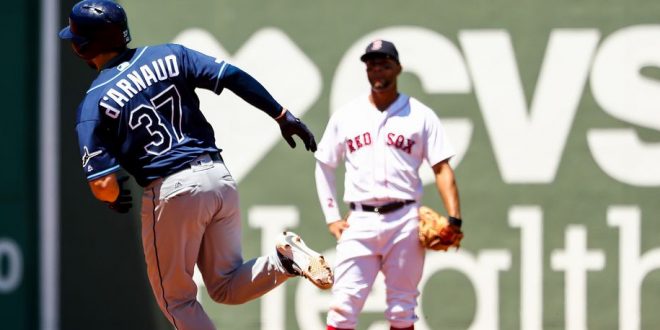 The Tampa Bay Rays and the Boston Red Sox are set to square off for a three game series that will decide who takes second place in the AL East.

For the Rays, the last few games have been unique in the sense that 19 runs were scored in each. During their series with the Toronto Blue Jays, the last two games had a score of 10-9, with each teams being on the winning side of the scoreboard.

However, the Red Sox are no stranger to high scoring games either. In a recent showing against the Yankees, the Red Sox hung 19 runs on the scoreboard.

While the Rays have won three of their last four games, it can’t be overlooked that they previously went on 1-7 stretch earlier this month. In a series that takes us into August, the Rays will have an opportunity to gain some insurance wins to increase the gap between No. 2 and No. 3 in the AL East standings this week.

Being that the Rays and the Red Sox are inner division opponents, they are no strangers to one another. This week’s series will mark the fifth time the two teams have met up for a series this season.

It wasn’t too long ago that the Rays and Red Sox last saw each other. In fact, it was just a week ago that Boston took a three game series from the Rays at Tropicana Field. During the three game set, Boston had an impressive offensive outing, which has been a common theme for them during the month of July. Fueled by offense, Boston was able to secure two of three games.

The only way the Rays were able to stop the bleeding was with Charlie Morton‘s 11 strikeout night during the last game of the series. The right hander was able to silence the Red Sox bats, allowing the Rays to put up runs of their own.

Following Morton’s dominant performance last week against Boston, the righty received the nod to open up this week’s series for the Rays.

Not only did Morton have success against Boston during his last outing, but the righty boasts the lowest ERA in the American League. Morton also provides some kind of spark for the Rays as the team has won four of the last five games that Morton has started.

Charlie Morton has the lowest ERA in the AL and is vital to the @RaysBaseball as they make their playoff push.#RaysUp x #TheLeaderboard pic.twitter.com/G2quflyZdQ

As for the opponent, Boston will go with David Price to open the series.

While Price has been pretty nomadic throughout his MLB career, landing gigs with the Detroit Tigers, Toronto Blue Jays and Boston Red Sox. It was the Rays that brought Price into the league with the No. 1 pick in the 2007 MLB draft. Currently, Price boasts a 3.66 ERA and a 1.19 WHIP.

Batting around the bush

As aforementioned, the Red Sox have had a great month offensively. Over the last 10 games, Boston has mustered at .309 batting average and has outscored opponents by a combined 24 runs. As it stands, Boston leads the MLB in batting.

As for the Rays, their offense surely hasn’t been anything to write home about. In the league, they sit in the middle of the field with a .253 batting average. However, a few players have found offensive rhythm for the Rays, most namely Travis d’Arnaud.

This week’s midweek series between the Rays and the Red Sox is an important one. Although there is still much baseball to be played, the battle for the No. 2 spot in the NL East is alive and well. With Boston’s offense surging, it’s just a matter of time before they get on a roll and distance themselves from Tampa Bay. Morton and the rest of the Rays’ bullpen will have to pitch well on the road to yield of the Red Sox and create separation in both the AL East and Wild Card race.

Ainslie is a journalism major at the University of Florida where she specializes in Sports Media. Her main passion is college football as it was a huge part of her childhood. Ainslie serves as a current correspondent for the Ocala Star-Banner, a newspaper for the Ocala, Florida area. She currently covers Marion County high school sports.
Previous Patriots Begin Quest to Repeat at Training Camp
Next Russell Westbrook Excited to Reunite With James Harden