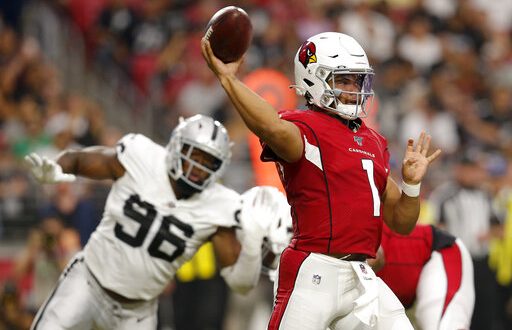 All Arizona Cardinals rookie quarterback Kyler Murray does is win.

Before entering the NFL, he accumulated a 57-3 record through high school and college. Most notably, he’s the reigning Heisman Trophy winner. His performances were good enough to warrant being the number one pick in the 2019 NFL draft. He is going to be the Arizona Cardinals starting quarterback for the upcoming season, and hopefully for many seasons to come.

To make this a reality, Murray needs to acquire consistency to his arsenal of abilities.

For the preseason debut, the Los Angeles Chargers went to Arizona to usher in the Kyler Murray era. He played one drive, nine snaps in total. Murray completed six of seven passes for 44 yards.

He actually completed all seven passes, but wide receiver and fellow rookie KeeSean Johnson stepped out of bounds before catching the ball for about an eight-yard gain with four minutes left in the first quarter.

Eager fans did not get to see Murray sling the ball downfield. Despite throwing from the shotgun formation every time, many of the plays on his drive didn’t gain many yards. Two of his completions occurred behind the line of scrimmage.

One was a screen pass to David Johnson. The other was a pass to Larry Fitzgerald from an RPO (run pass option) that went for very few yards.

It was a solid debut that pleased head coach Kliff Kingsbury, who said Murray operated well and took care of the football.

Kingsbury vowed Murray would play more than one drive in week two against the Oakland Raiders, and he did. Murray played four series, and he, along with many of the Arizona starters, looked poor.

The rookie quarterback went 3-for-8 throwing for 12 yards. Murray was getting flushed out of the pocket and having to throw on the run. He got sacked twice, once in his own end zone for a safety.

In a controversial call, Murray was at fault on two false starts for clapping his hands before the snap. In total, the Cardinals were penalized 10 times while Murray was on the field and 14 times in total.

There is no prohibition against clapping. You just can’t do anything abrupt to try and draw the defense offside. The action has to be smooth and deliberate. They are calling it very tight on him. I didn’t think what he was doing was abrupt.

Throughout the game, the rookie signal caller could not get into a rhythm. One of his best throws of the game, a long completion to KeeSean Johnson, was called back for offensive pass interference.

The Cardinals travel to the Minnesota Vikings on Saturday for their third preseason game. The expectation is that Murray will play more against what is arguably the best defense he has faced yet. Kingsbury said this about what to expect from the offense:

Kingsbury and Cardinal fans will be hoping Murray can find consistency as the regular season nears and offensive complexity increases.

I'm a senior journalism student at Florida. I love sports, and I love covering sports. I'm one of the beat writers for the Gator soccer team right now, and if you follow me on Twitter @johnmiceli13 you'll never miss a soccer update
Previous Gainesville hosts Vanguard in High School Football opener
Next Franks Adopts Lion Mentality for 2019 Season