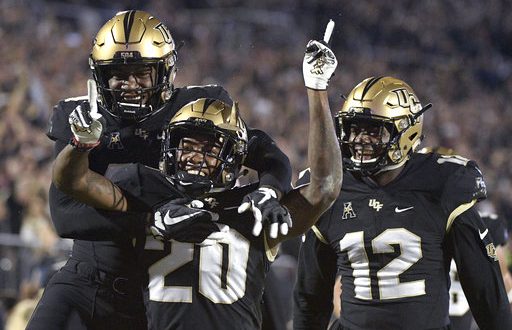 Central Florida defensive back Brandon Moore (20) is congratulated by linebacker Nate Evans, left, and linebacker Eric Mitchell after returning a blocked punt for 60 yards during the first half of an NCAA college football game against Cincinnati Saturday, Nov. 17, 2018, in Orlando, Fla. (AP Photo/Phelan M. Ebenhack)

Thursday Knight Lights: UCF Set To Get Their Season Underway

The last five years of UCF football has been a whirlwind; especially for three redshirt seniors who sit on the Knights’ roster this season. Offensive lineman Jake Brown, defensive back Nevelle Clark and defensive lineman Brendon Hayes have been on a five-year roller coaster ride with the Knights football program. During their first season at UCF, this trio lived through a 0-12 season prior to seeing two coaching changes revolutionize the UCF football program.

Now, four years removed from their introductory year, this group of super-seniors will begin their hunt for a third consecutive undefeated regular season this Thursday.

Kicking off the 2019 season on Thursday evening, the Knights will match up with the Florida A&M Rattlers for just the second meeting in history. The last, and only other time the schools met in 1987, the Rattlers took a slim 19-14 win over the Knights. This time around, the Rattlers will be staring down a much different football team in the UCF Knights.

Looking back at the last game of the regular season in 2018, the Knights saw their coveted starting quarterback, McKenzie Milton go down with a gruesome leg injury that Milton is still recovering from today.

While Milton’s relief, Darriel Mack Jr. played well in the remaining games of the season, including the AAC Championship, Mack fractured his ankle earlier this summer. Thankfully for the Knights, head coach Josh Heupel made excellent use of the daunting transfer portal in landing former Notre Dame quarterback, Brandon Wimbush.

Wimbush started for the Fighting Irish to kick off the 2018 season but was ultimately shelfed after tossing three interceptions against Ball State. Nonetheless, Heupel is confident he made the right decision in giving Wimbush the nod after a wide-open quarterback battle.

However, Heupel said early this week that true freshman, Dillon Gabriel will also take snaps in the season opener.

“Dillon’s earned the right to have an opportunity to go out there and play some football,” Huepel said. “I think, as a young player, that exposure will be really beneficial to him as well.”

Gabriel hails from Mililani High School in Hawaii, much like Milton who remains on the roster.

Relying on the backfield

Despite Heupel being confident in his quarterback, one can never undermine the difficulties that come with a change under center. Fortunately for the Knights, they will be able to lean on the talent and depth they return to the backfield.

Returning junior Greg McCrae was the bell cow for the Knights last year, rushing for over 1,100 yards. McCrae also mustered a season average of 8.9 yards per carry and 11 total touchdowns.

Between the two, the Knights’ offense should be able to thrive off of the ground game giving Heupel the opportunity to allow his quarterbacks to get in rhythm.

On the defensive side of the ball, the Knights will also see many familiar faces returning to the unit. Last season, the Knights’ defense forced 28 turnovers, ranking sixth in the nation.

Redshirt junior, Richie Grant returns to the defensive backfield after spending last season as the leading tackler for the Knights. Over the course of last season, Grant tallied 68 tackles and six interceptions.

In the trenches, Heupel is confident that his defensive front has what it takes to be a dynamic group if they invest on every down.

The Rattlers will visit Spectrum Stadium on Thusday night after a 6-5 2018 season. The Rattlers finished 5-2 in the MEAC conference last season.

At the helm of the Rattlers’ football program is head coach Willie Simmons. Simmons knows that he and his team are opening their season with a big test.

“I think it’ll show us if the little things we preach on a daily basis will show up on gameday. That’s what I’m looking forward to seeing, how this team competes, how we handle adversity because I know we’ll see it on the road, and just how we play as a team.”

For the Knights, Heupel and his team are looking forward to getting back on the playing field.

If the Knights go undefeated again this season, will they finally get the playoff berth they’re looking for? While the answer to that is as still months down the road, it all starts with Thursday night’s game against the Rattlers. UCF and FAMU will kick off their seasons Thursday night with a 7:30 start time.

Ainslie is a journalism major at the University of Florida where she specializes in Sports Media. Her main passion is college football as it was a huge part of her childhood. Ainslie serves as a current correspondent for the Ocala Star-Banner, a newspaper for the Ocala, Florida area. She currently covers Marion County high school sports.
Previous Peter Alonso Sets The Mets Single Season Home Run Record
Next Gator Volleyball Is Back and Ready to Go