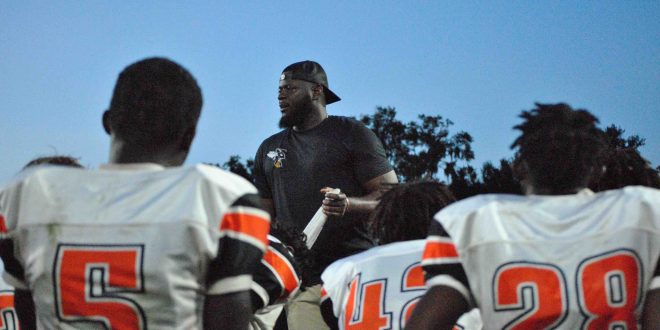 Ingram talks to his players while down 7-6 at halftime against rivals, P.K. Yonge in their August 23 game.

For many kids, football is a game. It is an excuse to avoid studying for a quiz to run around outside with the neighbors in the front yard. Sometimes, that youthful joy turns into a way to get to college and then for some into a career. But for Cornelius Ingram, it has been his entire life.

At the age of seven, Ingram’s father became the head coach of his youth team, putting him at starting quarterback. “I was a quarterback from the age of seven, playing Pop Warner Football. Going through middle school I was still able to play Pop Warner Football, but then I was good enough to play Junior Varsity football as a seventh-grader,” Ingram said. The same year, he earned his first Varsity letter as an athlete on the basketball team, earning a starting position by eighth grade.

“For me, I had to mature fast. I was playing with a lot of older guys: one actually being my older brother, who basically taught me the game- taught me everything.”

Only from the opportunities presented to him by attending Hawthorne does Ingram believe he had so much success. Being a sixth through twelfth-grade school, Hawthorne was able to offer high school level sports to kids of younger ages, but not many kids made it to the junior varsity and varsity levels so early on. Often times, kids were only receiving two years at the varsity level. This sometimes caused them to fall behind in college recruitment opportunities.

After high school, Ingram moved on to play basketball and football at the University of Florida in 2004. Ingram red-shirted one season of basketball for the Gators before switching full-time to football. “Coach Meyer called me and he said, ‘Hey I heard you’re one of the best athletes on the team, I think you can run my offense.’ And I told Billy Donovan the next day that I was done playing basketball after the NCAA tournament,” Ingram recalled. He assured, however, that the switch caused no ill-will between himself and the other coaches—they knew football was his main sport.

However, it was not all an easy street for Ingram. By the time he had committed to the football team, there were other quarterbacks ahead of him in the lineup. This is how Ingram went from a quarterback of over ten years to a new tight end/receiver. Immediately, success showed through as the Florida Gators won a National title that same year and Ingram personally being named one of the top tight ends in the country. For him, this translated to a later NFL signing to the Philadelphia Eagles in spite of a torn ACL that kept him out of his senior season.

Let's get it!!! #GoGators pic.twitter.com/bOUyzcsNMy

Back to the Beginning

In 2014, Ingram went back to his Alma Mater to start his coaching job for the boys’ football team, picking up the job as the girls’ basketball coach two years later. “My message to my kids is that we all go through things. It might be an injury or the loss of a loved one, everyone faces adversity at some point in life. What you don’t do is give up, you keep fighting,” Ingram commented. Through the support of the Hawthorne community and the support of the adjacent towns, Ingram was pushed in the direction of coaching.

Ingram believes even now, that he was destined to come back to Hawthorne. He sees the adversity that he has faced with injuries and decision making in life, as lessons to be taught. Coaching various sports and age levels, Ingram feels connected to every aspiring athlete and student at Hawthorne.

With his dual-coaching job, Ingram also maintains a constant relationship with his brother. Greg Bowie serves currently as the head boy’s basketball coach, bringing the two back to their days of attending Hawthorne together. All while both giving back to Hawthorne what it gave to them.

Rylee is a second year Journalism major with a specialization in Sports and Media at the University of Florida College of Journalism and Communications.
Previous Eastside Football Looks to Bounce Back versus Bishop Moore
Next College Football Preview: Oregon and Auburn Headline Week 1 Matchups