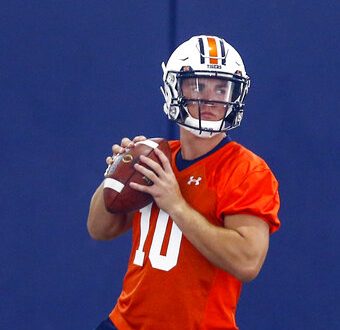 Week 1 of college football will feature just one matchup between two ranked teams.

Two prestigious football programs will meet on Saturday night from AT&T Stadium as they face each other for the first time since the 2011 BCS Championship Game.

On that occasion, Auburn edged the Ducks 22-19, but much has changed for these programs since that result, including both teams’ head coaches.

In this edition of the marquee matchup, one of the things to watch will be how Ducks’ highly touted QB Justin Herbert fairs against one of the best defenses in the nation.

The Tigers will look to give the potential first-round pick a rude introduction to his 2019 campaign life from “Jerry World.”

When defensive coordinator Kevin Steele was brought to Auburn in 2016, his task was to inject new life into a struggling unit.

The Tigers ranked 76th in the country in total defense prior to Steele’s arrival. Since then, they’ve never finished lower than 14th under him and Gus Malzahn.

This year their defensive front is anchored by DE Marlon Davidson, DT Derrick Brown and DE Nick Coe. The combination of these three experienced pass rushers will give Herbert and the Ducks’ offense a lot to think about. Auburn should also feature a secondary that will bring back four starters from last season.

The Ducks also struggled to run the ball consistently last season. Their sophomore combo of running backs (Travis Dye and CJ Verdell) both averaged under 5.1 yards per carry in 2018. An effective rushing attack would effectively take a lot of pressure off of Herbert.

Freshman Bo Nix takes over under center for Tigers

On the other side of the field, Malzahn will turn to a young signal-caller in 2019: Bo Nix.

Last season Auburn ranked in the middle of the pack when it came to yards per attempt through the air. However, the inclusion of the talented Nix should make for an exciting prospect in Malzahn’s offense.

The Tigers’ head coach had this to say about his QB’s developmental process.

On the ground, Auburn ranked slightly below Oregon last season. Hence, they’ll be plenty of pressure on Nix to perform in his first collegiate start.

Ducks’ head coach Mario Cristobal is well aware of the threat that Auburn’s QB can poise to his defense.

While a Week 1 matchup might spell a low-scoring affair between these two teams, the excitement emanating from this big-time matchup will be there nonetheless.