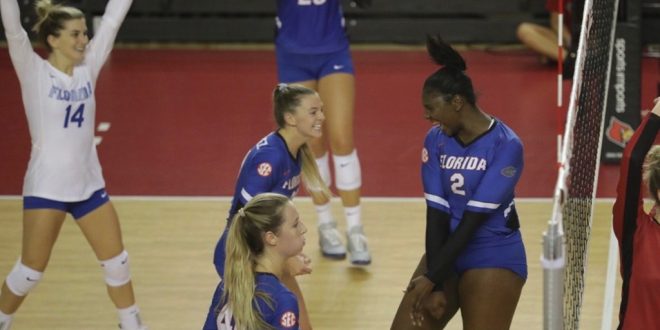 It was competitive but the Gators made quick work of their first opponent of 2019. The 10th ranked Florida Gators volleyball swept the number 25 Louisville Cardinals in the first match of the season Friday night.

This is Florida’s 27th season-opening win and third straight over a ranked opponent.

Florida came out in the first set hitting on all cylinders. A pair of sophomores led the way in kills as outside hitter Thayer Hall had six and setter Marlie Monserez went 4-for-4 in set one. Florida hit .464 as a team in that set.

The Gators stormed back in set two to take the lead after going down 11-6. They’d go on a 8-0 to make it 14-11 and didn’t look back winning the set 25-21. The two teams put on a competitive third set with Florida’s largest lead being only six but the Gators pulled it out 25-21.

Hall the led team with 12 kills and recorded 12 digs to give her the double-double.

Junior OH Paige Hammons and senior libero Allie Gregory performed well in their return to their hometown. Hammons had a complete game as she dished in six kills, two blocks and eight digs.

Gregory had a team-leading 14 digs and pitched one of Florida’s two service aces.

“Coming home isn’t always easy,” head coach Mary Wise said postgame. “There’s so many distractions when you’re playing in front of your hometown fans, friends and family . . . I can’t say enough good things about how they handled that.”

Wise on the play of Hammons and Gregory:

Florida’s head coach credited her players’ IQ because there was no scouting report that they could use to set up for blocks.

Wise said it was a really good performance to win the first match in L&N Federal Credit Union Arena because her team’s next opponent comes in less than 24 hours and it’s a team Wise referred to as an NCAA Tournament team out of the A10.

Florida will take on the Dayton Flyers at 4:30 Saturday afternoon. Dayton pushed the Texas A&M Aggies to five sets in the match preceding Florida’s. The game can be heard on ESPN 98.1FM/850AM WRUF.