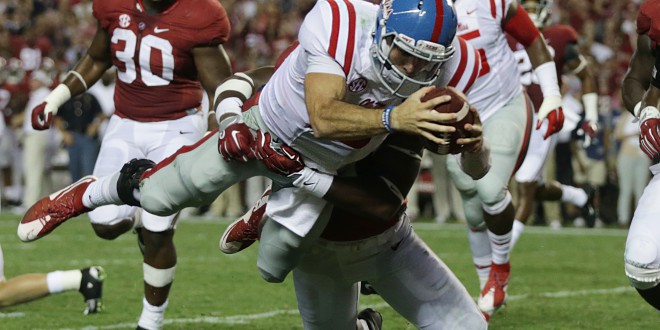 FILE - In this Sept. 19, 2015, file photo, Mississippi quarterback Chad Kelly dives in for a touchdown past Alabama linebacker Shaun Hamilton during first half of an NCAA college football game in Tuscaloosa, Ala. After leading East Mississippi Community College to a national title, Kelly transferred to Ole Miss, where he is ranked second nationally in passing efficiency. (AP Photo/Butch Dill, File)

For the first time in five years, the Rebels will begin their season with a true road game. Ole Miss will head to Memphis to take on the Tigers. Both teams feature new offensive and defensive coordinators as well as a chunk of new starters. Head coach Matt Luke is positive heading into the season opener but knows Memphis poses a difficult matchup.

There’s a lot of unknowns heading into the season for this Rebel team. After finishing last season at 5-7, Ole Miss is rolling with new coordinators on both sides of the ball. However, Luke has found key replacements at those positions.

Mike MacIntyre steps in as the new defensive coordinator. For the past six seasons, MacIntyre served as the head coach for the Colorado Buffalo where he earned National Coach of the Year in 2016

Rich Rodriguez takes over as the new offensive coordinator. Rodriguez brings in 24 years of coaching experience, most recently from 2012-2017 with the University of Arizona. In 2016 and 2017, Rodriguez coached the Wildcats into the top rushing offense in the Pac-12.

With a top-25 recruiting class for the second year in a row, many of the underclassmen are filling the gaps left from the seniors who graduated last year. The 2019 Rebels feature a redshirt freshman, Matt Corral, at quarterback as well as three new offensive line starters and wide receivers.

The ground game will be key as senior running back Scottie Phillips returns. Phillips ranked third in the SEC last season in rushing touchdowns and fifth in rushing yards. He’ll look to take advantage of a Tiger defense that allowed just under 32 points per game.

No one in the SEC converted carries into first downs or touchdowns at a higher rate than Scottie Phillips. pic.twitter.com/hVoemO8ILl

Coming off an 8-6 season that saw Memphis play in the AAC championship game, the Tigers are replacing a lot of talent as well. Head coach Mike Norvell had to find new offensive, defensive and special teams, coordinators.

Darrell Henderson, who was second in rushing yards in the NCAA last year, as well as three offensive linemen also need to be replaced.

With many new pieces on both teams, this season-opening game will be a good opportunity for new players to step up and set the tone for the rest of the season. 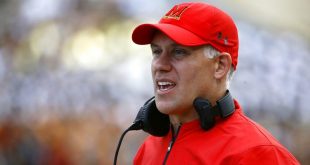