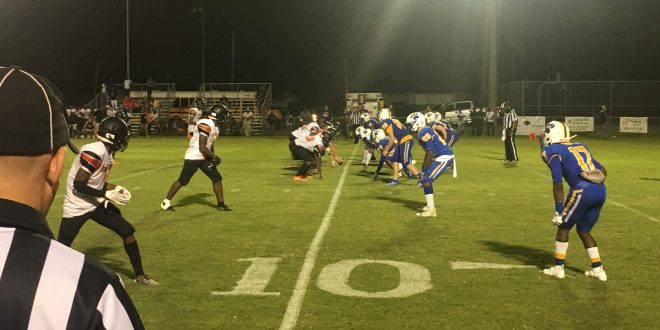 Hawthorne lines up for first possession of overtime against Newberry. 8/30/2019

It was a bizarre situation that forced overtime.

Newberry High School senior quarterback Jaylen Zullo completed a deep pass to the Hawthorne Hornets’ red zone with 0:01 left on the clock that stopped due to a Hawthorne penalty. First-year head coach Edward Johnson could have either denied a penalty to have an organized play from about the Hawthorne 40-yard line or have one second to try to snap the ball and kick a game-winning field goal as time expired.

He chose the latter.

“It obviously didn’t work out for us,” Coach Johnson said.

When the referee blew his whistle, the decimals of time remaining expired before the snap at the four-yard line, and regulation ended. This nullified what would have been a game-winning field goal by Hunter Etheridge.

How The Game Got There

The clash between Newberry and Hawthorne was largely a defensive struggle.

Both starting QBs were largely mobile, and both teams used a heavy run game.

In the first half, Newberry did well to limit Hawthorne RB Jayquan Williams. The front seven did well to get early penetration behind an undersized Hawthorne offensive line. At the half, it was 14-7 Newberry, with their scores coming from QB Jaylen Zullo and RB Kobe Delima. The lone Hawthorne score came on a short field drive courtesy of an interception that was pounded in by Williams in the first quarter.

In the fourth quarter, still 14-7, Hawthorne ate over eight minutes of clock on a 16-play 74-yard drive that yielded no points after a defensive stand by Newberry. The Hawthorne defense stepped up to force a three-and-out and a poor punt. Williams scored again to tie the game at 14 with 19 seconds remaining in regulation. Newberry’s Zullo had one message to his team after the end of regulation.

“We’re not losing this game,” Zullo repeated to his Panthers teammates.

Hawthorne received the ball first, but only managed a field goal after being stuffed on the run on first and second down.

When Zullo and the Newberry offense, they ran the ball into the endzone in three plays, claiming victory with a score of 20-17 in overtime.

Takeaways For Hawthorne and Newberry

This was far from a perfect game for either side, despite the excitement.

Hawthorne committed six delay-of-game penalties, four of which were in the first quarter, amassing 30 yards of penalties as a result of clock mismanagement. In addition to the penalties, turnovers allowed Newberry to capitalize. Head coach Cornelius Ingram said the errors were crucial in deciding the game.

“We definitely have got to take care of the ball man,” Ingram said. “Mistakes and penalties at crucial times set our offense back.”

Newberry was able to bounce back from an opening week loss to give head coach Edward Johnson his first career win as a coach.

When the PA system announces that this was his first win, Johnson told his players, “this isn’t about me, this is about us.”

Johnson is Newberry’s fourth coach in the past ten years, and he hopes this dramatic win is the catalyst his team needs to start consistently winning games.

“Hopefully, fighting through some adversity tonight and getting the win carries forward for a momentum boost,” Johnson said.

Originally from Seminole in the Tampa Bay area, Kyle is a contributor for ESPN Gainesville as well as local NPR and PBS affiliate WUFT. Kyle wants to get into sports with a lofty dream of being a sports broadcaster. He was raised playing soccer and baseball while watching hockey and football, so the knowledge about various sports is fairly extensive.
@KyleFanslerUF
Previous Ole Miss Hits Road to Start Season Against Memphis
Next Gators Soccer Takes on No. 4 UCLA 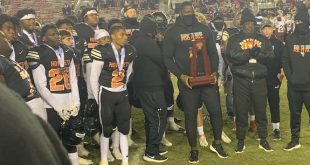