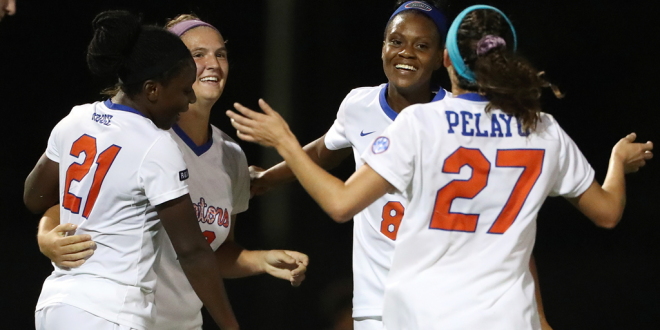 Florida and Auburn meet Sunday in SEC Tournament first round play in Orange Beach, Ala. Photo By: Tim Casey

Gators Soccer Takes on No. 4 UCLA

Tonight at 8, the Florida Gators soccer team will face off against No. 4 UCLA in Los Angeles. This match comes just days after the Gators dropped their first game of the season to Southern California, losing 3-1.

While Florida lost by a couple goals, Becky Burleigh and the Gators may reflect on the game and consider themselves unlucky. USC dominated the first half of play, outshooting the Gators 9-3 and outscoring them 2-1. However, the second half was a different story.

After the second-half stoppage, the Gators looked rejuvenated. This time around, Florida outshot USC 9-5, but instead of tying things up, USC added another goal to finish things off.

For a full recap of the game by Juan Aguerrevere, click here.

In the Gators’ first three games, within the first 40 minutes of play, their opponents have outscored them 3-0. The first of these goals came against FAU, and the last two came in the match against USC.

While Florida was able to come back against FAU and win 3-2, Burleigh may need to make some tactical adjustments to get her team going earlier on. Against tougher opposition, like their future SEC opponents, the Gators may not be able to pull off late, second-half comebacks.

The Gators will play their second-straight California-based opponent in UCLA at 8 p.m. The Bruins are 3-0 this season, having defeated Iowa State (3-0), Long Beach State (1-0), and No. 1 Florida State (2-1).

The Bruins extended their unbeaten streak to 16 games after defeating No. 1 Florida State, 2-1.

To avoid dropping two straight, the Gators will need to keep a close eye on senior Jessie Fleming. The Canadian midfielder has scored three goals in three games for the Bruins, with one against Iowa State and two against FSU. In addition, she has one assist. In 2018, she earned All-PAC-12 acclaim for the third-straight year, despite not playing the entire season.

Fleming’s partner in crime is Ashley Sanchez, a junior forward. The Monrovia-native has a goal and two assists in three games. Last season, she made the most goal-scoring contributions on her team with a total of 35 (10 goals, 15 assists). She also was recognized with several individual honors, including first-team United Soccer Coaches All-American.

The Gator to Watch Against UCLA

Junior forward Deanne Rose got off to a red-hot start against FAU, in which she bagged two goals. Then, against USF, she grabbed an assist.

Rose has represented her country, Canada, on 41 occasions, scoring eight goals. Most recently, she was called up for the 2019 Women’s World Cup in France. She made one substitute appearance in the tournament.