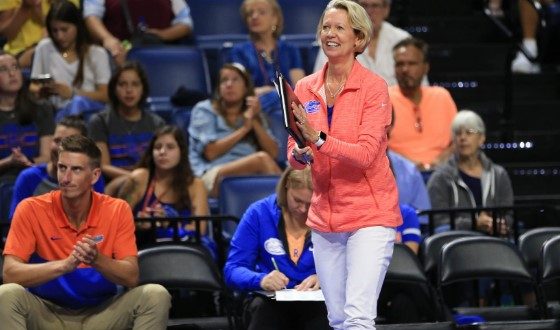 After two impressive wins, the seventh-ranked Florida Gator volleyball welcomes the number one team in the land, Stanford, to the O’Connell Center on Wednesday. Also, Stanford is the second of three ranked teams Florida will face in the first week of the season.

Florida defeated Stanford in five sets in  the 2017 national semifinals. Now, Stanford enters as the defending national champions on a 34-game winning streak.

Kevin Hambly’s team opened the season 2-0 with sweeps over Charleston and Duke. They outhit those teams .391 to .133 in those matches.

Plummer sits tied for fifth all-time in career kills per set and is good position to crack the top 10 for career kills at 1,559. She led the way over the weekend hitting at a .431 clip with 28 kills.

"Two titles in three years teaches you to turn the page."#NextStartsNow pic.twitter.com/WlVJTKk3Wo

Additionally, six of their returning players were on Stanford’s championship teams in 2016 and 2018. Four of them see significant time with one being Plummer: some other players of note include the following…

Congrats to @Rachael5Kramer for earning Defensive Player of the Week honors! #GoGators pic.twitter.com/yjUtVyjCI7

The SEC crowned Kramer Defensive Player of the Week after she averaged over a block per set, including five in the sweep of number 25 Louisville. Furthermore, Kramer posted 18 kills on the weekend.

The sophomore Monserez earned her first Setter of the Week award. She put up a career-best 50 assists in the win over Dayton and threw in five kills in the victory over Louisville.

& congrats to @marliemonz for earning Setter of the Week honors! #GoGators pic.twitter.com/YN1LoUeer1

Fans who can’t make the game can watch it on the SEC Network and listen to coverage on ESPN 98.1FM/850AM WRUF.

Florida was tested at the Cardinal Classic on Sunday, and this match will be sure to give the Gators more learning opportunities. This time they’ll have the home court advantage.

Previous Gators Soccer Defeated by No. 4 UCLA
Next Gators Look to Show They’re For Real Against UT Martin