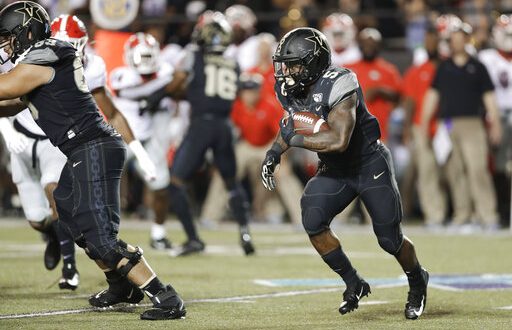 Vanderbilt running back Ke'Shawn Vaughn (5) carries the ball during the second half of the team's NCAA college football game against Georgia on Saturday, Aug. 31, 2019, in Nashville, Tenn. Georgia won 30-6. (AP Photo/Mark Humphrey)

Vanderbilt and Purdue face off on Saturday with both teams looking to bounce back from tough Week 1 losses.

Purdue came into its matchup with Nevada as heavy favorites despite playing on the road. The Boilermakers led by 17 at the half and had a 34-17 advantage late in the third quarter.

However, Purdue was held scoreless in the fourth quarter, and its defense crumbled as Nevada rallied. A muffed punt in the fourth quarter by star wideout Rondale Moore set up a field goal, and the Wolfpack accumulated over 150 yards on two 11-play touchdown drives to tie the game at 34 late in the game.

Quarterback Elijah Sindelar threw an interception in Purdue territory, the Boilermakers’ fifth turnover of the game, with 50 seconds left in regulation. Nevada kicker Brandon Talton drilled a 56-yard field goal to win the game and complete the collapse for Purdue.

It wasn’t much better for Vanderbilt.

The Commodores were clearly overwhelmed by a superior Georgia Bulldogs team. They trailed 14-0 after 15 minutes and 21-6 at the half. Georgia shut out Vanderbilt in the second half. The Commodores were outgained 479-225 in the contest.

Trying to Put the O’s in Commodores

Of all of the things that went wrong for Vanderbilt last week, the passing game was the most glaring problem. Starter Riley Neal completed 14 of 25 passes for just 85 yards. Neal, who transferred to Vanderbilt from Ball State, struggled against a Georgia secondary that allowed the fourth-fewest passing yards last season.

The Commodores’ new offensive line was also shaky against Georgia, but it should have an easier time against Purdue.

Vanderbilt’s offense will have to continue to rely on running back Ke’Shawn Vaughn as its new quarterback and offensive line get more comfortable. The redshirt senior was limited to 15 carries and 74 yards last Saturday. As the Commodores fell further and further behind, they couldn’t afford to run the ball as much.

It’s back to basics for the Commodores.

One of Purdue’s objectives for this tilt against Vanderbilt has to be limiting the turnovers. The Boilermakers still outgained Nevada 519 to 404. However, turning the ball over five times helped set the stage for the Nevada comeback.

For example, Sindelar was mostly solid, throwing for over 400 yards and four touchdowns. But the two interceptions that he threw prevented the Boilermakers from putting the Wolfpack away. The second interception set up the game-winning field goal.

Still, there are signs of optimism for Purdue heading into Saturday. The defense was solid through three quarters. The unit limited the Wolfpack to just seven points in the first half and 181 yards in the first three quarters. Barring another fourth-quarter collapse, the defense looks improved, but it will have to play a complete when Vanderbilt and Purdue face off on Saturday.

Previous Preview: Kentucky vs. Eastern Michigan
Next Tennessee Looks to Rebound vs. BYU