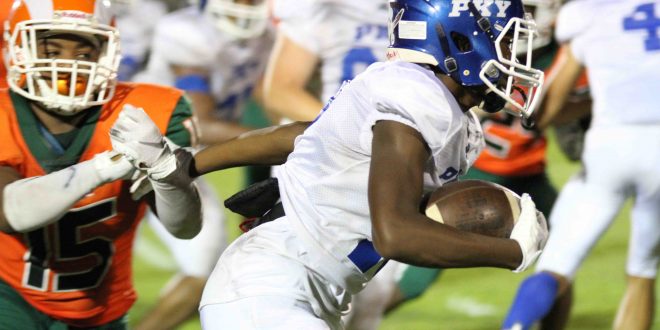 Jontez Williams carries the ball down the sideline while fighting Eastside defense.

Upon entering Citizens Field, P.K. Yonge was projected to lose by at least 21 points. However, after a strong running effort, the Blue Wave left only down by one score. A turnover late in the game as well as several long drives, allowed for the lead established by the Rams early on, to diminish.

The Eastside offense relied heavily on the dynamic duo, Anthony Richardson and Deion Jenkins. The two have been friends for years prior to high school. “I’m really close with both of our running backs,” Richardson said. “Jenkins and I have been friends for years and used to play in Little League together. I haven’t known our other running back as long, but he and I are still really close. I have nothing but trust for my teammates and that’s why we played so well.”

The game had a surprise visit from the University of Florida football coach Dan Mullen. Mullen was there to watch Richardson play, as he is committed to playing for the Gators next season. Mullen was not the only person in the stadium that was impressed by Richardson’s skills though. “He is a hell of a quarterback. He came back and saved them, because they pulled him little too early and we took advantage of that,” Head Coach of P.K. Yonge, Marcus McDonald said.

In the second half, the Rams got the scoring started with a three-yard rushing touchdown scored by Todarias Sumpter. From there, the Blue Wave scored the games next twenty points. P.K. Yonge receiver, Jacobi Byrd scored two touchdowns during that stretch. Sophomore quarterback Aaron Small Jr. exploded through an opening in the defense and scored another touchdown to bring the Blue Wave deficit to just five with 6:46 left in the game.

Aaron Small with a huge rushing touchdown to make this a one possession game! Eastside leads 39-34 with 6:46 to play. @ESPNGainesville @FlaHSFootball pic.twitter.com/rw6AALEIRD

Eastside was forced to put their star quarterback back in the game. When Richardson entered, they attempted to drain time on the clock. After several run plays and more than four minutes killed, Richardson plunged into the end zone from a yard out. P.K. Yonge answered on the next drive with Jacobi Byrd on the receiving end of his fourth touchdown of the night. However, Eastside recovered the onside kick, running the clock and securing their first win of the season.

Walking out of the game, P.K. Yonge only saw the good. The Blue Wave almost doubled their point total for the season against a team that was projected to crush them. “We are a 1A school by numbers, but we’re a 3A team and we just played a 5A team,” Coach McDonald said in his post-game speech. “They thought you guys were gonna quit, but no!”

Rylee is a third year Journalism major with a specialization in sports and media at the University of Florida College of Journalism and Communications.
Previous Florida looks to bounce back on the road against No. 8 Minnesota
Next Jared Grant’s hat trick leads Aucilla Christian past Saint Francis, 33-14 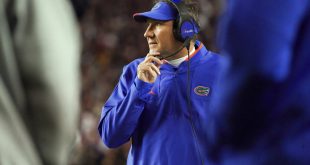 Less than 24 hours after the overtime loss to Missouri, the Dan Mullen era for …