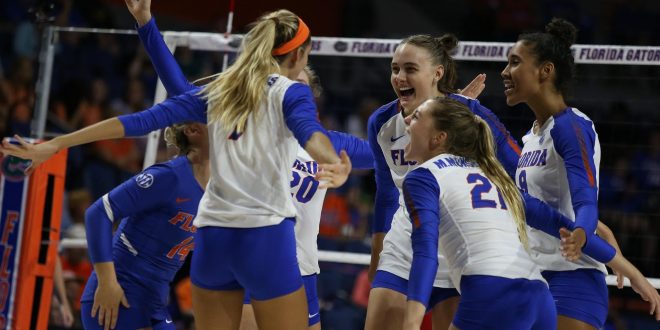 Florida looks to bounce back on the road against No. 8 Minnesota

The No. 7 Florida Gators volleyball team travels to Minnesota to take on the No. 8 Golden Gophers on Saturday night.

The last time the two teams met was in Gainesville for the 2006 NCAA Regional Semifinal. Furthermore, Minnesota leads the all-time series 3-1 over the Gators.

This is the third-ranked opponent Florida has faced this season.

Florida (2-1) looks to rebound from a loss to the top-ranked Stanford Cardinals. The Gators fell to the Cardinals in a three set match on Wednesday night.

Florida’s defense is led by middle blocker Rachel Kramer, who leads the Gators with 12 blocks.

Furthermore, libero Allie Gregory has contributed to the Gator’s defense. Gregory leads the Gators with 3.64 digs per set.

Outside hitter Thayer Hall has been a strong offensive presence for Florida. Additionally, Hall leads Florida with 45 kills and a hitting percentage of .218.

The depth of the Florida offense gives the Gators a variety of offensive weapons, including right side hitter Holly Carlton and outside hitter Paige Hammons. Carlton recorded 10 kills against Stanford, while Hammons added seven kills.

Minnesota is looking for a comeback of their own, after falling to No. 3 Texas on Wednesday night. The Gophers fell to the Longhorns in three sets, including an extended third set that ended in a 33-35 loss for Minnesota.

In the match against Texas, right side hitter Stephanie Samedy recorded 14 kills. Samedy leads the team with 28 kills and records a .233 hitting percentage.

The Golden Gophers offense ranked among the top five in the 2018 season in kill percentages with .298. Furthermore, Minnesota ranked third in the country in kills per set with 14.9 in 2018.

You can catch live coverage of Saturday night’s match on GatorVision. The match is set to start at 8 p.m.

Previous Can Texas A&M Enact Revenge on Clemson?
Next Eastside Wins a Shootout Against P.K. Yonge, 46-40