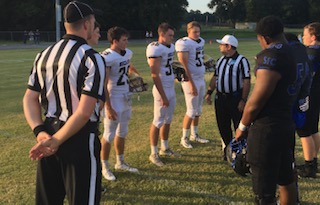 The Aucilla Christian Warriors of Monticello, Florida dominated the Saint Francis Wolves from the get-go.

The Warriors relied on its formidable defense in the first half as it held Saint Francis to a goose egg. The Wolves struggled on third downs, converting zero of five in the first half. After turning the ball over on downs on its first drive of the game, Aucilla Christian’s defense quickly forced a punt.

After a few stagnant drives by both teams, two consecutive turnovers occurred. The first was a flea-flicker by Aucilla Christian that was intercepted by the Saint Francis sophomore, Omarian Littles. The following play resulted in a Warriors interception by Brady Browning, who returned it across midfield.

Aucilla Christian capitalized on its field position by running a four-play, 47-yard drive, resulting in a Jared Grant 1-yard rushing touchdown. The Warriors two-point conversion attempt was no good, however. This left Aucilla Christian with a 6-0 lead.

The touchdown was followed by yet another disappointing Saint Francis drive. The Wolves quickly went three and out and were forced to punt. Aucilla Christian’s offense immediately put its defense back on the field after Saint Francis recovered Jared Grant’s fumble.

The Wolves, looking to capitalize on the turnover, drove down to the Warriors’ 25-yard line where they turned the ball over on downs. A few drives later, Brady Browning broke out for a 50-yard run that led the Wolves down to the 1-yard line.

On the next play, quarterback Tag Williams punched it in for a touchdown. Jared Grant’s successful two-point conversion gave Aucilla Christian a 14-0 lead. With one chance remaining in the half, Saint Francis went three and out.

Jared Grant’s defensive skills flashed as he sacked quarterback, Tyler Stone, for a loss of 7 yards to finish off a dominating first half.

Aucilla Christian came out flat to open up the second half. A quick three-and-out resulted in a punt for a net loss of a yard. This set up the Saint Francis offense with excellent field position on the Warriors’ 30-yard line.

The Wolves finally capitalized, thanks to a 7-yard passing touchdown from Tyler Stone to Omarian Littles. Stone’s pass was a beauty as he snuck it just over the cornerback’s head and into the hands of Littles in the back corner of the end zone. The extra point shortened Aucilla Christian’s lead to a touchdown.

The Warriors quickly answered, however, with a return across midfield by senior, Nathan Dukes. This set up prime field position for the Warriors offense. A 7-play, 45-yard drive would result in a Warriors touchdown. Jared Grant’s bulldozed his way through multiple Saint Francis defenders en route to a 6-yard rushing touchdown. The two-point conversion attempt that followed was unsuccessful.

A 20-7 Warriors lead could not be answered by Saint Francis. Tyler Stone threw an interception to Aucilla Christian linebacker, Dalton Anderson. Upon getting the ball back, the Warriors turned it back over to the Wolves. Tag Williams threw an interception to Omarian Littles. Littles’ impressive return was negated by a block in the back penalty against Saint Francis. The Wolves once again failed to capitalize, capping off a 35-yard drive with a turnover on downs.

Aucilla Christian opened up its lead as Jared Grant completed his hat trick. Grant’s 1-yard rushing touchdown was his third of the night, and it gave the Warriors a commanding 27-7 lead. On Saint Francis’ next drive, Tyler Stone threw his third interception of the game. Brady Browning’s second pick of the night resulted in a return for six. This touchdown was the icing on the cake as it gave Aucilla Christian a 26 point lead.

Saint Francis played for pride on its last drive of the game. They drove the length of the field and scored a garbage-time touchdown. Sophomore running back, Levi West, barreled his way into the end zone for a 5-yard rushing touchdown. With under a minute to go in the game, Aucilla Christian set up victory formation to secure a 33-14 win.

With a loss, Saint Francis falls to 1-2 on the season. The Wolves look to bounce back, however, on the road next Friday against Munroe. As for Aucilla Christian, they improve to 3-0 overall. The Warriors will prepare for a non-conference matchup against Georgia Christian next Friday.

Hello! I am a sophomore at UF studying journalism sports & media. I help contribute radio and website content for ESPN Gainesville. Additionally, I am a sports writer for The Independent Florida Alligator and help cover the UF women's basketball team. I am also the UF softball beat reporter for ChompTalk.com.
Previous Eastside Wins a Shootout Against P.K. Yonge, 46-40
Next Oak Hall looks to overcome turnover problems in home opener against Bishop Snyder