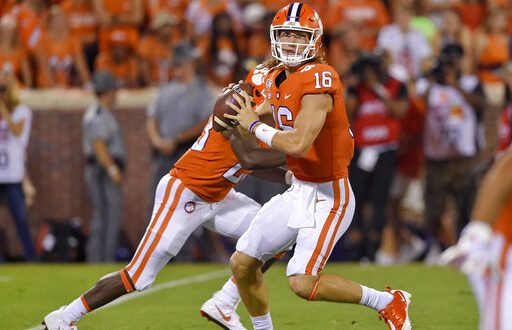 Last week was week one of the college football season, but it saw just two ranked matchups. This week features two ranked matchups pitting Top-12 opponents against one another. No. 9 Texas will host No. 6 LSU as the site of College GameDay, while No. 1 Clemson and No. 12 Texas A&M will face off in a highly anticipated rematch of last year’s 28-26 bout.

Clemson’s two-point win last season was the closest margin of victory it had all season, but it comes with an asterisk. Both Kelly Bryant and Trevor Lawrence were splitting snaps under center, with Bryant receiving a majority of the snaps. Now, Heisman-favorite sophomore quarterback Lawrence sets out as the lone starter where he hopes to improve on his excellent freshman stat line of 3,280 passing yards and 30 touchdowns with just four interceptions. Analysts and oddsmakers seem to be counting out the Aggies as the Tigers enter heavy betting favorites.

For the first time in a decade, everyone is betting against Clemson.

Will the Tigers make bettors look foolish, or is this number way too high?https://t.co/VanDF3LZ3P

It may be deservedly so, though, as Jimbo Fisher’s squad has a grueling task ahead with the defending national champions coming off an impressive 52-14 win over Georgia Tech.

Coming off an undefeated season last year, Clemson didn’t take any steps back at the skills position. In fact, Fisher says he believes the team is bigger, better and stronger.

The Tigers return 6-foot-4 junior receiver Tee Higgins, who caught 59 receptions for 936 yards and 12 touchdowns last season, and 6-foot-4 sophomore receiver Justyn Ross, who had 1000 yards receiving and nine touchdowns as a true freshman. They also added five-star receiver Frank Ladson Jr. out of South Dade High School in Miami, Florida, who also stands at 6-foot-4 and caught his first career touchdown in last week’s drubbing of the Yellow Jackets.

Clemson also returns its leading rusher from last season in Travis Etienne, who ran for over 1600 yards and 24 touchdowns. The junior, who finished seventh in the Heisman voting last season, is already making a case for this year with an opening week performance of 205 yards rushing and three touchdowns on just 12 carries.

Texas A&M will have their hands full come Saturday afternoon as they try to defeat Clemson in Year 2 of Fisher’s tenure. One of the Aggies’ keys to stopping Lawrence and this high-powered Clemson offense is putting pressure on the quarterback. Fisher stated its vital for his line to annoy and frustrate the sophomore quarterback all day long. If they can do that, then they just might be able to upset Dabo Swinney and hand Clemson its first loss since January 1, 2018.

Previous Previewing Columbia’s Matchup with Young Akelynn’s Angels Program
Next Florida looks to bounce back on the road against No. 8 Minnesota