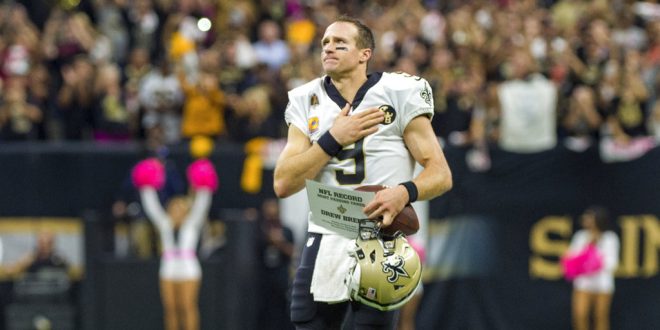 Drew Brees thanks the fans after breaking the NFL record for passing yards as The New Orleans Saints take on The Washington Redskins during Monday Night Football at the Mercedes-Benz Superdome in New Orleans, Monday, Oct. 8, 2018. (The Daily Advertiser via AP)

Monday Night Football is back and it will kick off with two powerhouse teams facing off as the Houston Texans travel to New Orleans to take on the Saints.

After winning the AFC South last year this Houston Team will be looking for more this year. With the addition of Kenny Stills, Carlos Hyde, and Duke Johnson Jr., the Texans now have depth both in the air and on the ground. Houston also brought in Laremy Tunsil at the left tackle position in order to improve their offensive line. Houston’s acquisition of Tunsil should immediately improve the team since left tackle was the Texans’ weakest position.

Over the last two seasons, the Texans have had inexperienced players manning the position, allowing 116 sacks, the most in the NFL. Last season alone, the Texans gave up a league-high 62 sacks. However, with Tunsil playing left tackle the last two years, the Dolphins allowed just 85 sacks.

It’s hard to talk about the Texans offense without mentioning DeAndre Hopkins, who is arguably the best receiver in the league at the moment, and QB Deshaun Watson who is coming off a break out year. Hopkins and Watson combined for a total of 115 receptions over 1500 yards and 11 touchdowns last season. With the addition of Kenny Stills and with Will Fuller returning to the team, the Texans have one the best receiving cores in the NFL. That duo will only benefit the Watson-Hopkins combo as it’ll limit the double-coverage put on Hopkins and open up more opportunities for the offense.

Looking at the other side of the field, you have one of the most dominant players to ever play the defensive end position in J.J. Watt. With the losses of Jadeveon Clowney and Tyrann Mathieu, this Houston defense certainly has question marks. However, with Watt and head coach Bill O’Brien, the team could get things in order throughout the season. The Texans’ defense ranked 22nd in the NFL before the Clowney trade.

The New Orleans Saints are back and they are hungry for a Super Bowl. This will be the first game for the Saints since they lost the NFC Championship Game to the Los Angeles Rams after a controversial no-call on a pass interference penalty. The Saints go into the 2019-2020 season as Super Bowl contenders mainly because of Drew Brees’ control of the offense.

Great seasons are normal now for Brees, and it just gets easier with great receivers like Michael Thomas. Last season, Thomas had 125 receptions for over 1400 yards and 9 touchdowns. Brees is coming off a record-breaking year where he set the NFL record for career passing yards. Another great asset to the Saints offense is Alvin Kamara, who is a top-three running back in the NFL. Kamara is absolutely lethal when given the ball but is also great at receiving. Last year, Kamara had over 90 receptions for over 800 yards.

The Saints did not have many notable signings or trades this offseason besides the addition of Latavius Murray. Murray was brought in to help Kamara in the backfield.

The defense has a habit of starting slow for New Orleans, but the unit always seems to catch up midseason. “The last two years, we definitely hit our stride midseason, quarter-season through. And this is something that you want to start out hot out the gates,” said defensive end Cameron Jordan. “We need that same mentality we usually have in Week 3 in Week 1.”

The Saints have not won a season opener since 2013. They’ll try to end that streak by starting off in the win column and beating Houston Monday night. Meanwhile, the Texans are seen as an underdog for having several new faces on the field. Houston has also lost three of its four most recent season openers, including two that were at home.