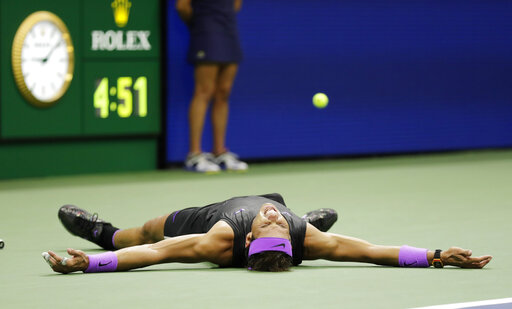 Rafael Nadal is still celebrating his victory over Daniil Medvedev on Sunday in the grueling five-set match to secure his fourth US Open Championship title and 19th Grand Slam title.

The US Open Championship match was quite a tiresome battle between No. 2 Rafael Nadal and No. 5 Daniil Medvedev, lasting four hours and 50 minutes. The match went five sets, 7-5, 6-3, 5-7, 4-6, 6-4. Although Medvedev took the lead late, Nadal was able to overcome a 3-2 deficit in the final set to attain the victory. After a long tournament and a long final match, Nadal described this match as “very intense.”

No. 2 Rafael Nadal entered the US Open Championship match at age 33, having 18 years of professional tennis under his belt. His opponent, No.5 Daniil Medvedev, is only 23 years old with five years of professional experience. The difference in age between the two opponents is an astonishing ten years.

Unbelievable 5 Grand Slams after the age of 30!! #Nadal #USOpen pic.twitter.com/t7r67IhYaK

Ranked #2 overall in the world, Rafael Nadal was no stranger to the US Open gaining his fourth US Open title on Sunday. Due to the victory, Nadal is now second all-time for US Open titles, sitting one title shy of Rodger Federer. Nadal has

Even with the number of Majors he has one, the feeling of satisfaction is still there for the veteran Nadal. After his victory, Nadal had this to say:

Nadal’s US Open victory gives him his 19th Grand Slam Championship title. An absurd 19 titles leave Nadal one Grand Slam title away from tying 38-year-old Rodger Federer from the most Grand Slams victories of all time. Nadal certainly has the chance to surpass Federer’s record considering the age difference. With Nadal’s amazing track record in the French Open, he has the opportunity to beat out Federer in the coming years.

It's getting tight at the top following a thrilling #USOpen final…https://t.co/HL5TtPBtZ7