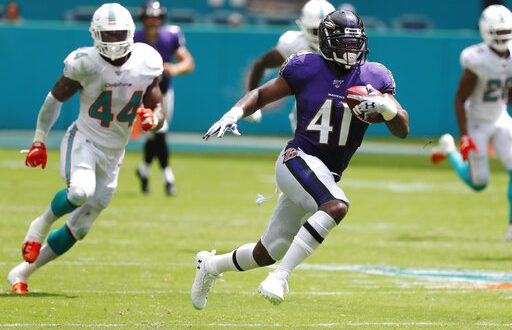 Baltimore Ravens defensive back Anthony Levine (41) runs the ball, during the first half at an NFL football game against the Miami Dolphins, Sunday, Sept. 8, 2019, in Miami Gardens, Fla. (AP Photo/Wilfredo Lee)

Brian Flores’ debut as the Miami Dolphins head coach was anything but routine. The Dolphins suffered a rout at the hands of the Baltimore Ravens in an embarrassing 59-10 loss in front of a home crowd.

When the former Patriots coach accepted his role with the Dolphins in early February, expectations were high for the defense. After all, he did coach a Patriots team that held the NFC Champion Rams to 3 points in Super Bowl LIII. However, that defensive toughness was not present in Miami’s home opener. Flores’ new squad allowed a franchise record of points in a regular-season contest at home.

Doubts surfaced in the preseason as to whether Ravens QB Lamar Jackson could throw as well as he can run. Needless to say, Jackson seemed to silence his critics with a five-touchdown performance on Sunday. In three quarters of work, Jackson completed 17 of 20 passes for 324 yards and five touchdowns. Not only that, but Jackson did this while posting a perfect 158.3 passer rating. So, yes, he was statistically perfect.

Jackson addressed his doubters in the postgame press conference:

Jackson wasn’t the Ravens’ only offensive star, though. Marquise “Hollywood” Brown, the first-round pick out of Oklahoma, hauled in two deep touchdowns in his NFL debut. The rookie took a short pass 47 yards to the house for his first catch and touchdown of his career. As if that wasn’t enough, Brown hauled in an 83-yard bomb for his subsequent second catch and touchdown of his career.

Not many things went right for the Dolphins in Sunday’s game, other than a 6-yard Ryan Fitzpatrick touchdown pass and a 54-yard field goal from Jason Sanders.

Miami gave up a historic 643 yards, beating out the previous record 622 yards they surrendered to the Patriots in 2011.

On offense, the story wasn’t necessarily a compilation of mistakes, but rather a lack of movement or positive plays. Dolphins QB Ryan Fitzpatrick completed 14 of 29 passes for 185 yards and a touchdown. Fitzpatrick made some history himself on Sunday, but not necessarily the kind the Dolphins would want. The veteran quarterback became the only QB to throw interceptions for eight different teams. However, Fitzpatrick tried to stay positive after the blowout:

Former Cardinals starter Josh Rosen took over late in the third quarter once the game was well out of hand and went 1-3 with an interception.

After the disaster start, multiple Dolphins players have reportedly requested to be traded. All of this comes after several rumors have floated around that the team is tanking for the first overall draft pick in next year’s draft and the possibility of a star quarterback. These reports come from ProFootballTalk’s Mike Florio who broke the news before Sunday night’s game between the Patriots and Steelers.

News: Multiple #Dolphins players have requested to be traded away from the team after the 59-10 loss to the #Ravens via @ProFootballTalk

The players don't want to be part of a tanking team. pic.twitter.com/ypl7TDiIX0

Outlook for the Dolphins

Miami finds itself in an unfamiliar position, as they sport an 0-1 record for the first time since 2016. The Dolphins won’t have it any easier next week, either, as they play their AFC East foe New England Patriots, who are coming off a 33-3 win against the Steelers.

Adjustments will certainly need to be made on both sides of the ball, but after only one game with his new team, Brian Flores has time to right the ship.

I'm a third-year student at the University of Florida passionate about storytelling and sportswriting. My goal is to work in communications for a professional sports team after I graduate.
Previous Jaguars’ Rookie QB Takes Over after Foles’ Injury
Next Buccaneers Drop Home Opener Against 49ers