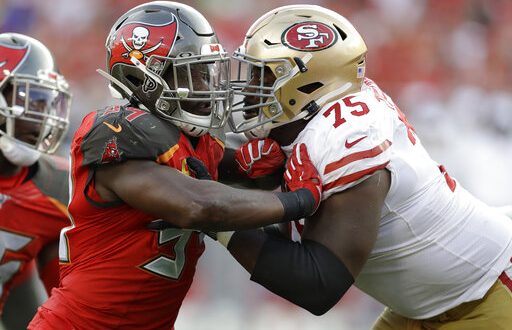 The Tampa Bay Buccaneers hosted the San Francisco 49ers on Sunday for their home opener where they lost 31-17. At the hands of Jameis Winston, the Buccaneers suffered through a few turnovers. Among the Bucs’ four turnovers, Winston threw two pick-sixes that allowed the 49ers to score two of their three touchdowns. They also received eight penalties that robbed them from two possible touchdowns.

Head coach Bruce Arians recognizes that this was not the way they wanted to open their season. He says that all that is left now is to learn from their mistakes and prepare for their next game.

The Buccaneers played a solid first half and went into the break up 7-6. However, once the second half started, their mistakes started catching up to them.

The team recognized that their execution was poor after the first half ended, and it is something that they need to work on moving forward.

“That’s what we talked about at half and before the game, and right now that was the message. When we stop beating ourselves we can be pretty good.”

Despite their loss, Arians says he was pleased with most of the decisions taken by both the defense and offense. He recognized that they missed a few tackles and received penalties. But he also acknowledged that their defense only allowed 256 yards and there were no red zone conversions.

Offensively, Arians thought that quarterback James Winston made good plays, aside from the two that led to the pick-sixes. Winston acknowledges that once the pick-sixes started happening, the team started losing their drive.

After being asked about scoring his first career touchdown, cornerback Vernon Hargreaves said it didn’t matter that much. He said that what matters is how they perform as a team, and the execution was not there that night.

The Tampa Bay Buccaneers will travel to Charlotte to face the Carolina Panthers this Thursday at 8:20 p.m.

Camila is a senior at the University of Florida studying Telecommunications with a specialization in production and a minor in Innovation. She is also seeking a Sports Management certificate. Camila is also WUFT's news director as well as a sports reporter/anchor.
@CamilaMaffuz
Previous Ravens Crush Dolphins in Record-Breaking Victory
Next Antonio Brown Signs with Patriots after Release from Raiders