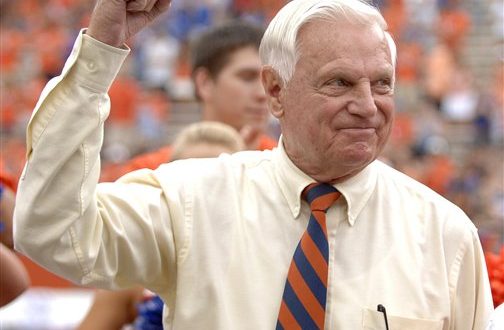 George Edmondson, also known as "Mr. Two Bits" acknowleges the roar of the crowd before the Kentucky Florida NCAA college football game in Gainesville, Fl, Saturday, Oct., 25, 2008. George, who is 86 years old and has been leading the Florida fans in cheers before games since 1949 will retire this fall. (AP Photo/Phil Sandlin)

It’s November 22, 2008. George Edmondson slips into his seersucker pants, buttons up his pale yellow oxford and knots up his orange and blue striped necktie for the very last time. He makes the trek north from Tampa to Ben Hill Griffin Stadium, where the Gators are playing The Citadel in the final home game of the season, to lead 90,374 Florida fans in the iconic “Two Bits” cheer.

It was very fitting for Edmondson, better known as Mr. Two Bits, to go out in the fashion that he did.

Ironically, Edmondson attended The Citadel before enlisting in the United States Navy in World War II. However, the significance of his final time leading the cheer against The Citadel reaches far beyond that.

In 1949, Edmondson attended his first football game at Florida Field where the mighty Gators took on The Citadel. When the players marched onto the field, the entire stadium booed.

Edmondson, in a Gator football tribute video on Twitter, recalls saying, “Good gracious – oh my! What’s everyone booing about?”

“The team was terrible,” Edmondson said. “They were just awful.”

However, Edmondson wasn’t sure that booing was the answer to the Gators’ woes.

“Shoot, I’ve never booed in my life and I’m not going to start now,” he said. “They’re just kids out there playing, let’s cheer for them!”

Little did he know, his “Two bits! Four bits! Six bits! A dollar! All for the Gators, stand up and holler!” cheer would become a time-honored staple at Florida field for over half a century.

…For an eternity of enchantment

Fast forward to nearly 70 years later, and its September 7, 2019. Jane Edmondson, better known as “Mrs. Two Bits”, slips a pale yellow t-shirt with a faux orange and blue striped necktie over her head. She heads to Gainesville with three grandchildren and five great-grandchildren in tow.

Ahead of the Gator home opener against  Tennessee Martin on Saturday, Jane Edmondson enters Ben Hill Griffin without her husband George, for the very first time.

On July 2, Mrs. Two Bits was widowed when her husband of 44 years passed away at the ripe old age of 96.

When news broke of Edmondson’s passing, Florida Gators all around the country issued their condolences.

We mourn the passing of a legendary Gator – Mr. Two Bits. https://t.co/wGikZLu3J2

So sad to hear about Mr. Two Bits passing away. Traditions are what makes college football so special, and George Edmondson started one of the greatest. With memories we will always cherish, he will be dearly missed by all Gators.

On Saturday night, the late Gator “cheerleader” was honored for his unconditional love for the Florida Gators.

On the Wednesday before the Gators game against the Skyhawks, Gator head coach Dan Mullen encouraged fans to wear their Mr. Two Bits t-shirts, the same one Jane donned on Saturday.

In a sea of orange and blue, dots of pale yellow were sprinkled all throughout The Swamp. Even former football coach Steve Spurrier got in on the action.

For Jane Edmondson, seeing thousands of people wearing her late husband’s cheerleading uniform was something she will remember forever.

Reflecting back to when George and Jane first started courting, Jane says the Gator legend invited her to a game, leaving out a few important details on what was to come.

On Saturday, she would once again get a glimpse of just how big her late husband’s impact was at the University of Florida. Though this time, younger generations of her and George’s family would head to mid-field and lead fans in the “Two Bits” cheer.

“I told those boys to practice,” Jane cracked. “They’ve all been looking at videos and the little kids have been practicing.”

Despite all the preparation, the nerves were still alive and well ahead of the traditional performance.

Edmondson’s grandson, Robert, said there were definitely some nerves when he and his family took the field ahead of Florida’s big win over UT-Martin.

Robert, a UF alum from the class of 2012,  recalls first accompanying his grandfather around the age of nine.

Mr. Two Bits’ other grandson, Chris King, also grew up spending Saturdays in Gainesville trotting alongside his celebrity granddad.  According to King, his grandfather became quite the navigator in The Swamp.

However, granddad’s celebrity status followed him beyond the walls and secret alleys at Ben Hill Griffin Stadium.

“What I do for the Gators is from the heart,” George Edmondson once said. “Not from the pocketbook.”

While the Gators’ favorite cheerleader has traded his earthly life for whatever comes next, George Edmondson’s family knows that his voice will bounce off of the walls of Ben Hill Griffin Stadium as long as there is Florida Gator football to be played.

“He’s always out there on that field,” Kevin King said of his granddad. “If you’re at Florida Field, he’s there too.”

Ainslie is a journalism major at the University of Florida where she specializes in Sports Media. Her main passion is college football as it was a huge part of her childhood. Ainslie serves as a current correspondent for the Ocala Star-Banner, a newspaper for the Ocala, Florida area. She currently covers Marion County high school sports.
Previous Raiders Knock Off Broncos in Season Opener
Next Saints Take Down Texans as Wil Lutz Hits 58-Yard Game Winner