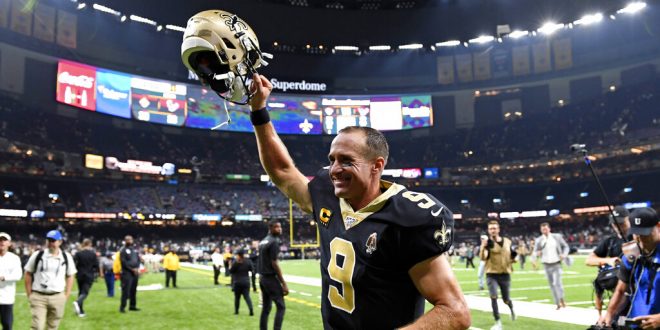 On Monday night, the Saints opened their season in the Mercedes-Benz Superdome where Wil Lutz drilled a 58-yard field goal as time expired to give the Saints a 30-28 win over the Houston Texans.

Texans’ Offense Gets Rolling Before Halftime

After a scoreless first quarter, Deshaun Watson and the Texans’ offense heated up.  Linebacker Whitney Mercilus got his hands on a Drew Brees pass to give the Texans the ball as the first quarter wound down and the offense capitalized.

The first play of that drive, the football world was reminded just how explosive this offense can be. Watson launched a deep ball to Will Fuller, who made an impressive catch in traffic to haul it in for 54 yards.

A few plays later, Watson flashed his athletic ability on a 21-yard touchdown run. He weaved past defenders and leaped into the end zone to put the Texans up 7-0.

Hopkins had eight catches for 111 yards and two touchdowns.

The Texans led 14-3 at halftime, but the Saints looked like a different team in the second half.

Saints’ Offense Comes Out Hot in the Second Half

The Saints’ offense opened things up in the second half. New Orleans’s running backs, Alvin Kamara and Latavius Murray led the attack on the first drive of the third quarter. Kamara rattled off a 41-yard catch and run at the beginning of the possession. Shortly after, Murray ended it with 30-yard touchdown run.

Houston responded immediately with a 16-yard touchdown to Hopkins, extending their lead 21-10. However, Brees and his offense would respond.

An 11-play, 75-yard drive was capped off with Brees finding Taysom Hill, the Saints utility player, for the score.

Down three heading into the final quarter, Brees continued to dissect the Houston defense.  They had no answers the entire second half. This time, receiver Tre’Quan Smith was on the other end of a Brees touchdown pass. Saints led for the first time, 24-21.

The Saints had possession with just over three minutes to go. On a short third down, Brees did what he has done his whole career, threw a perfect deep ball to the speedy vet, Ted Ginn Jr. Game over. At least the fans thought.

New Orleans ran the clock down to under a minute before kicking a field goal. Giving Watson and the Texans offense only 50 seconds to operate with no time outs and needing a touchdown. Watson, astonishingly, only needed 13 seconds to recapture the lead.

On a perfectly placed deep ball down the sideline, Hopkins made a fantastic 38-yard catch by tracking the ball and hauling it in just before going out of bounds. In the next play, Watson hit newly acquired Kenny Stills down the seam for a 37-yard score.  A missed extra point was negated by a questionable roughing the kicker penalty, allowing Houston to hit from closer and take 28-27 lead with 37 seconds left.

That 37 seconds and one timeout was all Brees and his offense needed. Brees showed poise as he surgically drove the Saints within Lutz’s range. Three completions got them to the Houston 40-yard line, where head coach Sean Payton called their last timeout with two seconds left. Lutz trotted on the field and drilled the 58-yard walk-off.

Brees and Lutz Had No Worries

Brees has always been reliable in situations like this. When every decision is crucial to the outcome, he rarely crumbles under pressure. He proved that once again last night. His clock management and ability to find the open receivers on the last drive was what made it possible to give Lutz a chance, which was all he needed.

Once that time out was called with two seconds left, Brees knew it was over.

As Brees drove down the field, Lutz, confident he was going to get a chance, got ready on the sideline.

Lutz: when you have Drew as your quarterback…with 37 seconds left you know there is going to be a chance to get a kick #Saints #MNF pic.twitter.com/QtRDsBk4Mb