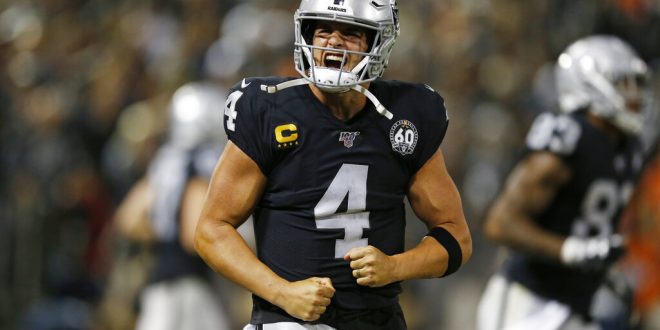 Despite all the drama surrounding the Oakland Raiders in the offseason, it didn’t affect the teams play on Monday night.

Carr finished the night with 259 passing yards and a touchdown. He also didn’t turn the ball over the entire night.

The performance spoiled Denver quarterback Joe Flacco’s Broncos debut, who the team acquired from Baltimore in the offseason.

The Raiders struck quickly to begin the game. After receiving the opening kickoff, Oakland drove 72 yards on 10 plays to take a 7-0 lead. Carr hit Tyrell Williams on a deep drag from eight yards out. Williams finished with six receptions for 105 yards and the score.

Denver’s offense was unable to generate much momentum against the Raiders defense, punting on each of their first two possessions.

Oakland extended it’s lead late in the second quarter, driving 95 yards and getting into the endzone on Josh Jacobs’ two-yard touchdown run to make it 14-0.

Holding off the Comeback

Brandon McManus trimmed the Oakland lead for Denver coming out of the half, drilling a pair of 26-yard field goals on the Broncos’ first two possessions.

However, Carr and the Raiders offense responded early in the fourth quarter. Carr used five plays to drive 60 yards, completing passes of 28 and 24 yards to set up Jacobs’ four-yard touchdown run to make it 21-6.

Jacobs, the Raiders’ first-round draft pick from the University of Alabama, finished with 85 yards on 23 carries and two touchdowns.

Denver answered with a field goal, McManus’ third of the night, to make it 21-9.

However, Oakland responded with three points of its own. Dwayne Harris returned the ensuing kickoff 72 yards and set up a 29-yard field goal from Daniel Carlson.

Flacco marched Denver right back down the field though, bringing the game within a score. The veteran quarterback drove Denver 75 yards and hit Emmanuel Sanders on a one-yard touchdown to make it 24-16.

However, Carr hit Williams on a 3rd and eight on the Raiders’ next drive with under two minutes to clinch the game.

The Raiders defense sacked Flacco three times on the night and held the Broncos rushing attack to 95 yards.

Oakland stays in the AFC West for week two, hosting the Kansas City Chiefs. Denver will play its home opener next Sunday, welcoming the Chicago Bears.