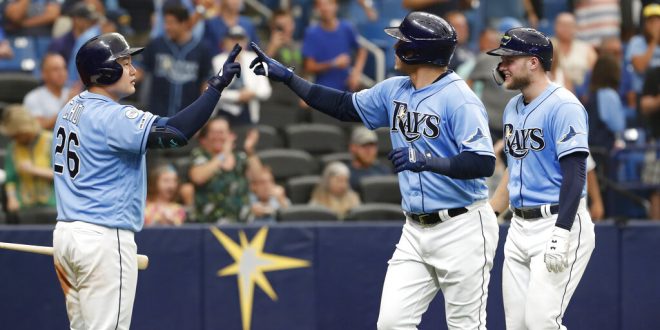 Rays Set for Texas Road Trip as Season Winds Down

The Tampa Bay Rays are back in action tonight against the Texas Rangers as they look to lock up a postseason birth with three weeks to go in the regular season.

Getting Hot at the Right Time

The Rays have played some excellent baseball over the last couple weeks, winning nine of their last 10 games. They ride a five-game win streak into Arlington hoping to create some separation in the AL Wild Card race.

Tampa Bay welcomed back Tyler Glasnow during their winning streak who has been out since May with a forearm strain. In addition, Austin Meadows has been red-hot to start the month. He’s hitting over .500 with four home runs.

Tonight’s pitchers will feature Ryan Yarbrough for the Rays while Lance Lynn takes the mound for the Rangers. Yarbrough has been inconsistent in his recent starts but has been a staple in the Rays’ rotation in the second half of the season. Lynn has been a bright spot on a Rangers team that is playing spoiler at this point in the season.

Yarbrough will look to improve upon his 11-3 record. However, he hasn’t recorded a decision in his last four starts. Lynn hopes to finish his first season with the Rangers strong. So far, he’s racked up over 200 strikeouts in a season for the first time in his career.

With just under three weeks to go in the regular season, Tampa Bay looks to finish strong and host their first Wild Card game. The Rays close out their season on a somewhat favorable schedule with nine of their final 17 games against teams with an under .500 record and only four games against current playoff teams. On the other hand, they still have matchups against the Dodgers and Yankees.

Rounding out the AL Wild Card race is the Oakland Athletics and Cleveland Indians. Oakland features a much more favorable schedule as they only have three more games against current playoff teams. The Indians, on the other hand, have been inconsistent in recent weeks.

With the season coming to a close, it’s unsure who will step up and secure a playoff birth. The only sure thing is that a wild finish is in store.