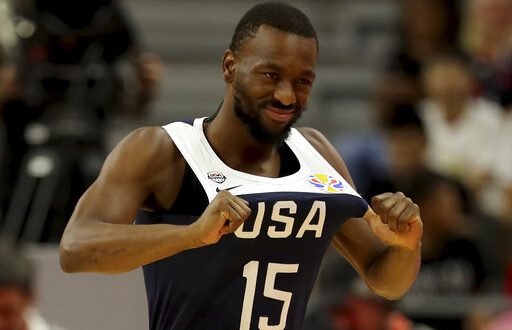 United States' Kemba Walker pulls on his jersey during a consolation playoff game against Serbia for the FIBA Basketball World Cup in Dongguan in southern China's Guangdong province on Thursday, Sept. 12, 2019. The U.S. will leave the World Cup with its worst finish ever in a major international tournament, assured of finishing no better than seventh after falling to Serbia 94-89 in a consolation playoff game on Thursday night. (AP Photo/Ng Han Guan)

Team USA made headlines for their lackluster roster earlier this summer and it finally came back to bite them.

The Americans were defeated by France 89-79, breaking a 58 game win streak in international play. The last time Team USA lost a game in the FIBA world cup was in 2006 to Greece in the semi-finals. Team USA will fail to get a medal for the 2nd time in the last 10 years of FIBA competition.

Utah Jazz guard Donovan Mitchell did everything he could do to avoid the loss.

The 23-year-old collected 29 points while also adding six rebounds and four assists. Mitchell has proven that he is capable of being a contributor to Team USA’s Olympic roster. The rest of the Americans did not produce as much as they needed to. Marcus Smart was second on the team in points with 11. Kemba Walker contributed with 10 points of his own.

Don’t Mess with the French

Before the tournament began, France was labeled one of the teams capable of knocking off Team USA– and they did just that.

Led by Utah Jazz center Rudy Gobert and Orlando Magic guard Evan Fournier, the French were relentless. Gobert scored 21 points while also grabbing 16 rebounds. Fournier led the team in scoring with 22 points on 5-of-13 shooting from the three-point line. France will face Argentina in the semi-finals.

It only got worse for the Americans as they lost their consolation game to Serbia on Thursday 94-89. The U.S. got off to a horrid start, and the team found itself down 32-7 after the first quarter. They made a huge comeback effort, but they weren’t able to come away with the win. Team USA can no longer finish higher than 7th in the tournament. This will be the worst finish by a Team USA team with NBA players on the roster.

What’s Next For Team USA

Luckily for the U.S., they were able to qualify for next year’s Olympics in Japan before the back-to-back losses.

Next year’s Olympics team will most likely feature proven NBA superstars. After the l0ss to Greece in 2006, Team USA came back with a vengeance in 2008 with “The Redeem Team” that won the gold medal in Beijing. The message has been sent to Team USA. They must have star-studded rosters if they want to dominate because the global competition has taken the next step.