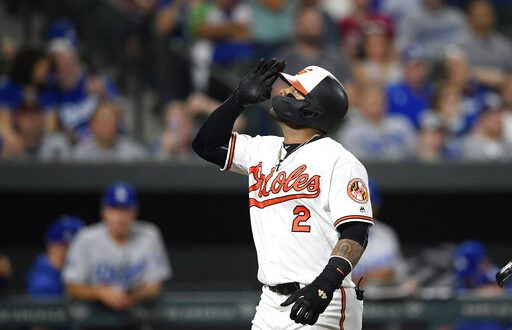 Baltimore Orioles' Jonathan Villar celebrates his three-run home run during the seventh inning of the team's baseball game against the Los Angeles Dodgers, Wednesday, Sept. 11, 2019, in Baltimore. Villar connected for the 6,106th homer in the majors this season. That topped the mark of 6,105 set in 2017. The Orioles won 7-3. (AP Photo/Nick Wass)

When Justin Verlander publicly claimed that MLB was intentionally “juicing” their baseballs this season, not too many people around the league were thrilled.

“Major League Baseball’s turning this game into a joke. They own Rawlings, and you’ve got Manfred up here saying it might be the way they center the pill,” Verlander said back on July 8.

Marcus Semien came to the plate in the top of the 4th inning in Houston last night with the A’s down 1-0.

By then, 20 home runs had already been sent into orbit on Wednesday. The shortstop then blasted a towering solo shot into the left field train tracks at Minute Maid Park. He tied the ballgame. He tied the single-season record at 6,105.

The record was shattered less than 10 minutes later.

Enter another shortstop, Jonathan Villar, in Baltimore. The Dominican native swatted a 93 mph fastball from left-hander Caleb Ferguson over the left field wall at Camden Yard. His 21st long ball of the season gave the Orioles a 5-2 lead over the LA Dodgers.

In doing so, Villar became a fine exclamation point for the “year of the long ball.”

MLB and its fans are currently celebrating the peak of a trend that’s been ongoing for a number of seasons. That’s OK.

The hitters fittingly broke the record on the 18th anniversary of the 9/11 terror acts in New York. Even more reason to celebrate.

Most baseball fans love the aura of a lone home run as much as they love a starting pitcher striking out 10 hitters.

Yet, something about this season’s uptick in big flies feels special — if not odd. Power numbers are up extraordinarily league-wide. Plenty of other peripheral home run records will be broken before the regular season is complete.

The @mlb record for home runs was set tonight at 6106 and climbing…. Here's an animation of every home run hit this year colored by exit velocity pic.twitter.com/6eapW6VUUd

Both the AL and NL will likely break their respective home run records. The NY Yankees and Minnesota Twins can both eclipse new records for most taters by a team. Former Gator and current NY Met Pete Alonso has already mashed more homers than any rookie in history (47).

Whether this is all due to an increase in hitters’ power/strength, an overall increase in “launch angle,” Verlander’s proclaimed “juicing” of baseballs or even a combination of them all, the home run is definitely not leaving anytime soon.

The balls will resume flying today at 1:10 ET.