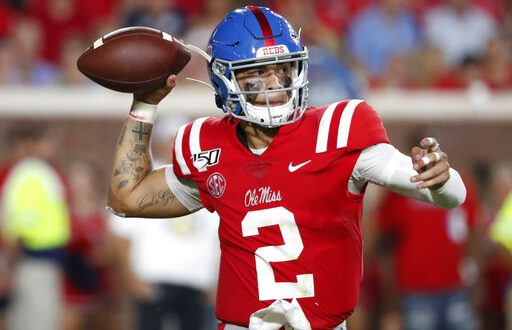 Ole Miss (1-1) scored a big 31-17 win last week against Arkansas. The Rebels will look to carry that momentum into its matchup against Southeastern Louisiana (1-0) on Saturday at 7:30 p.m.

The new-look Ole Miss offense took its lumps in Week 1 against Memphis. The Rebels were breaking in a redshirt freshman at quarterback in Matt Corral and a new offensive coordinator in Rich Rodriguez. They also had to replace their top-three receiving leaders from last season.

The results were not pretty.

One week later, it was a completely different story against Arkansas.

Corral looked like a completely different quarterback. He went 16 for 24 with 246 yards, two touchdowns and no interceptions. He earned SEC Freshman of the Week honors.

Running back Scottie Phillips had some breathing room in the running game thanks to improvements in the passing game. Phillips was bottled up in Week 1, rushing for just 62 yards on 19 carries. However, against the Razorbacks, the senior dominated. Phillips ran for 145 yards and two touchdowns.

Ole Miss out-gained Arkansas 483 yards to 361 yards. This weekend’s game against FCS opponent Southeastern Louisiana provides the Rebels another week to work out some of the kinks in this new offense before Ole Miss’ out-of-conference game against California and the rest of its SEC schedule.

Sanogo out for year

Head coach Matt Luke confirmed Monday that junior linebacker Momo Sanogo had surgery on Tuesday after suffering an injury against Arkansas. He will be out for about 10 weeks.

Sanogo led the Rebels in tackles last season with 112 and had 6.5 tackles for loss. Ole Miss expected Sanogo to be a leader on the defense, but Ole Miss will have to play without him moving forward.

Previous Team USA Upset By France, Serbia in FIBA World Cup
Next Big Tests for Both the Knights and Noles