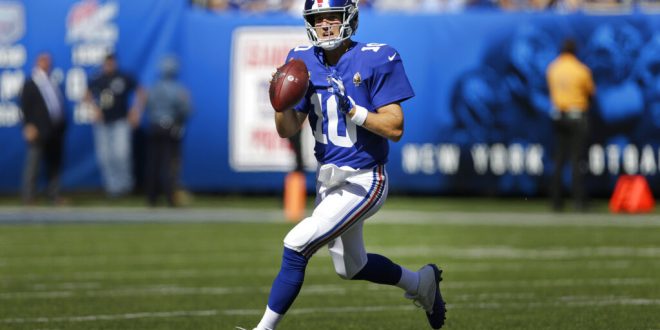 New York Giants quarterback Eli Manning looks to pass while under pressure during the second half of an NFL football game against the Buffalo Bills, Sunday, Sept. 15, 2019, in East Rutherford, N.J. (AP Photo/Adam Hunger)

The New York Giants are moving on from veteran quarterback Eli Manning. The team announced on Tuesday morning that rookie Daniel Jones will start Week 3 against the Tampa Bay Buccaneers.

The decision to bench Manning, a two-time Super Bowl MVP, came after the Giants 0-2 start. Manning currently posts a quarterback rating of 37.3, throwing for 556 yards, two touchdowns and two interceptions this season.

The Giants are turning to rookie QB Daniel Jones, who will replace long-time starter Eli Manning.

He is 1 of 5 players in NFL history with multiple Super Bowl MVPs. pic.twitter.com/aSQ1oFpncY

The Giants made it clear in the 2019 NFL Draft, drafting Jones sixth overall, that they had plans of finding a successor to Manning. Although New York never stated a timeline for replacing the veteran quarterback, Jones preseason stats made it difficult for the team not to give him serious consideration.

In the preseason, Jones posted a quarterback rating of 137.3, throwing for 416 yards and two touchdowns.

In a press release from the Giants, head coach Pat Shurmur stated that the decision to start Jones was not about Manning but allowing Jones to move forward.

It’s unclear where the Giants and Manning will move forward from this point. However, what is clear is that Manning’s mindset hasn’t changed.

In a press conference, Manning stated that he is going to prepare for Tampa and that it is “business as usual.”

Despite Manning’s focus on preparing for Tampa, trade rumors are already circulating. According to CBSSports.com, the Jacksonville Jaguars and the New Orleans Saints both have vacancies at the quarterback position.

Injuries to Jaguars’ quarterback Nick Foles and Saints’ quarterback Drew Brees has left both teams searching for a starting quarterback. At this time Manning has not expressed any interest in being traded.

Manning has spent 16 season with Giants and will be an unrestricted free agent at the end of the season.

Up Next for the Giants

Jones will take his first snap as the Giants’ starting quarterback this Sunday. New York will kick off against the Buccaneers (1-1) beginning at 4:05 p.m.

Previous Patient and Precise: Is Trask Ready?
Next Saint Francis Travels to Jacksonville to Take on Eagle’s View in Their Long Awaited Home Opener