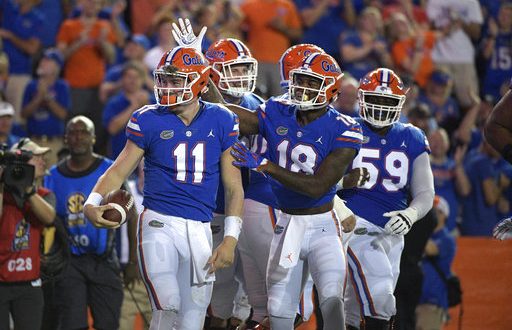 Patient and Precise: Is Trask Ready?

For the first time since the 1960s, the starting quarterback for the Florida Gators will don no. 11. The last player to do it?

For redshirt junior Kyle Trask, the no. 11 was given to him as a freshman. Trask, who wore no. 18 in high school said he knew what the significance of wearing no. 11 was as a quarterback at the University of Florida.

And come this Saturday, Trask will get the opportunity to make the no. 11 significant again.

Patience is a virtue

In a time where the transfer portal is taking college football into other dimensions, it’s shocking that Kyle Trask, a graduate student at the University of Florida, opted out of exercising the option to leave the Gators as a graduate transfer. A decision so shocking that even Gators head coach Dan Mullen asked Trask “where his head was at” earlier this year in January.

Trask, despite playing in only five games as a Gator said he never considered leaving Florida.

Trask said he trusted his gut throughout his time at Florida and knew all he needed was one opportunity to prove himself.

That opportunity nearly came last season after Feleipe Franks’ less-than-great performance at home against Missouri. Down 35-10 late in the third quarter, Mullen threw Trask into the ball game as Florida fans cheered wildly at the quarterback change.

Despite the 35-17 loss, Trask’s quarter and a half outing raised eyebrows and it was predicted that no. 11 would start against South Carolina the next week. However, Trask’s plan to start came to screeching halt when he broke his foot in practice, ultimately ending his season.

Fast forward to present day and Kyle Trask is on the opposite side of the aforementioned scenario. Instead of bidding for a start and getting injured, Trask will start the game on Saturday after Feleipe Franks suffered a season ending injury against Kentucky last week.

When Franks left Kroger Field by way of injury cart on Saturday, Trask was called upon as the next man up.

With Feleipe’s gruesome injury, the path has been paved for Trask to take his opportunity by storm and etch his name into the long list of great Gator quarterbacks.

Its all in the preparation

Kyle Trask often mentions his preparation. Considering he hasn’t started a football game since his freshman year at Manvell High School in Texas, preparation is something Trask has done a lot of. Week in and week out.

One area that Trask’s preparation shows is his passing accuracy on the field. In five games at Florida, he has thrown 40 passes and completed 27 of them for a 67.9% completion percentage.

“That’s something I take pride in – my accuracy,” Trask said. “You can never be too accurate.”

Another area that Trask shines in is his ability to make quick decisions with the football.

Filling the shoes of a leader

With Franks’ absence, the Gators will be without one of their most outspoken leaders.

As offensive field general, Kyle Trask will be expected to step up and fill the leadership void on the offensive side of the football.

Thankfully for Trask, he’s learning directly from the source as he is leaning on Franks this week to pick up on any piece of information he can.

“Me and him have spoken a lot in the past few days,” Trask said. “He’s been really supportive. I’m sure he will be with everyone in the quarterback room during the whole preparation process.”

Despite the learning curve, Hammond has no doubts that Trask can lead the Gators on the field.

The Legend of No. 11 Coninues

The opening chapter of the legend of Kyle Trask will be written on Saturday when the Gators kickoff against the Tennessee Volunteers on Saturday at noon.

Ainslie is a journalism major at the University of Florida where she specializes in Sports Media. Her main passion is college football as it was a huge part of her childhood. Ainslie serves as a current correspondent for the Ocala Star-Banner, a newspaper for the Ocala, Florida area. She currently covers Marion County high school sports.
Previous Rays Clinging On To AL Wild Card Spot
Next Giants starting Daniel Jones after benching veteran quarterback Eli Manning