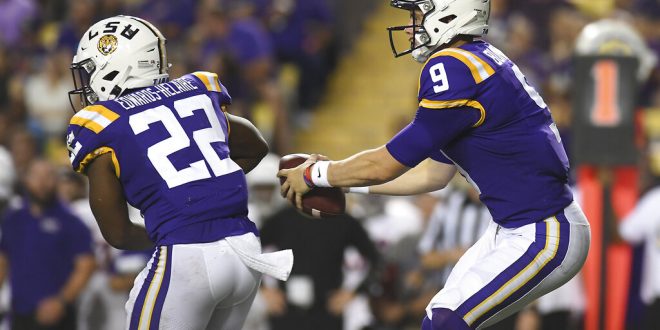 Facing off in Week 4

This weekend, the Louisiana State Tigers will face the Vanderbilt Commodores for the first time since 2010.

The last time these two teams met in September of 2010, LSU took home a 27-3 win in Nashville.

The LSU Tigers currently sit at No. 4 on the AP poll with a perfect 3-0 record. They are coming from a gratifying 65-14 win over the Northwestern State Demons in Week three. Vanderbilt will be the Tigers’ first SEC conference opponent of the season. Meanwhile, Vanderbilt has yet to win a game this season with a standing record of 0-2. Although, the Commodores will be well-rested after having a bye week in Week three.

Vanderbilt returns to action Saturday at 11 a.m. against LSU.#RTI | #AnchorDownhttps://t.co/TZOk7gA67Z

The Tigers will go into their SEC season opener missing at least three and maybe four defensive starters. Safety Todd Harris is done for the season after a knee injury in the first quarter in last week’s game against the Demons. Defensive ends Rashard Lawrence and Glen Logan will be out for at least another week. It is unsure whether linebacker K’Lavon Chaisson will be healthy enough to play in this weekend’s game. Chaisson is a key component of LSU’s defensive line as their best pass-rushing threat, although he is not completely ruled-out.

Meanwhile, Vanderbilt’s head coach Derek Mason confirmed Tuesday that the team has lost three players with season-ending injuries. Jamauri Wakefield is out, leaving the team very thin at running back with third stringer Ja’Veon Marlow out as well. Freshman Keyon Brooks now sits as the primary backup for RB Ke’Shawn Vaughn. The linebacker group is weakened with the loss of Colin Anderson. In addition, receiver Amir Abdur-Rahaman will be out for the remainder of the season.

Tough start for the Commodores

Vanderbilt has had a difficult run so far. Their season opener resulted in a tough 30-6 loss to the No. 3 Georgia Bulldogs. This was followed by another loss, 42-24, to the Purdue Boilermakers.

Commodore head coach Derek Mason said they’re not taking those losses for granted. They took adantage of the bye week to learn from their mistakes so far.

LSU head coach Ed Orgeron agrees that the Commodores are coming from some challenging matchups.

Kickoff is at 12 pm this Saturday in Nashville, where the Commodores and the Tigers will faceoff on Vanderbilt home turf.