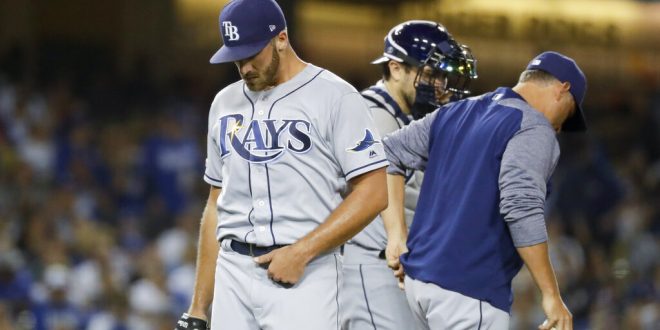 The Tampa Bay Rays lost 7-5 to the LA Dodgers Tuesday night. Now having lost two straight games, the Rays may be on the outside looking in for the final AL Wild Card place.

The game was fairly tight for the majority of its duration. After six, the Rays and Dodgers remained tied at two runs apiece. However, in the seventh, the Rays capitulated.

Corey Seager had a huge night at the plate for the Dodgers. In four plate appearances, he got two hits; both 2-run doubles. He would also score a run.

The Rays would bounce back to score three in the top of the eighth, but ultimately, it wouldn’t be enough.

No one from the Rays had a multi-hit game. However, Austin Meadows reached base on three occasions (two walks, one hit).

The Rays will face the Dodgers, Red Sox, Yankees and Blue Jays to close out the last 10 games of the MLB regular season. The pressure is on to perform, as the Rays are competing with the Oakland A’s and Cleveland Indians for the two AL Wild Card spots.

Bouncing back and setting records. Most strikeouts by an A's relief pitcher with more season to go!#RootedInOakland pic.twitter.com/Y0KZpGgrSA

As of now, the Rays are safe; but that could all change quickly.

The A’s are currently in first, two games ahead of the Rays. Oakland has won nine of its last 11 games, most recently defeating the Royals 2-1 Tuesday night. Their next game is against the Royals today at 3:37 p.m.

Behind the Rays are the Indians, just half of a game back. Cleveland has won its last two and will face the Tigers tonight at 7:10.