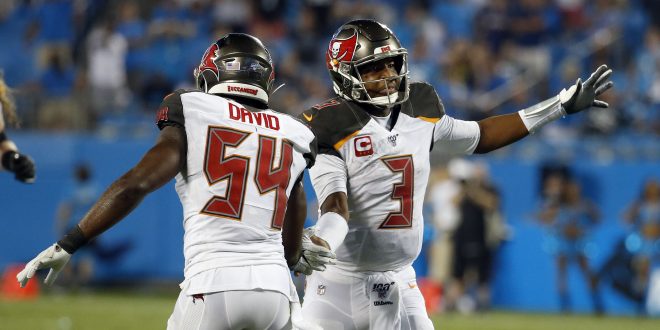 Everyone will have to wait in line to test Daniel Jones. The Bucs have dibs on the rookie.

The number six overall pick makes his NFL starting debut with the New York Football Giants in the Sunshine State against the Tampa Bay Buccaneers on Sunday.

This week, Pat Shurmur finally pulled the trigger. He benched a quarterback entrenched in the starting role for 15 years in exchange for the potential future of the franchise. Bruce Arians said the Giants starting Jones over Eli Manning doesn’t change their whole offense but changes a few aspects.

“Daniel Jones is ready to play and we’re going with him,” Shurmur said. “We do everything we can to win football games. And at this point we feel like he’s the guy we want to move forward with.”

Jones made his NFL debut in the Giants’ Week 1 loss to the Dallas Cowboys. He went 3-4 for 17 yards in his minimal time. He played throughout the preseason accruing over 400 passing yards and posting an 85 percent completion rate.

Jones on being named the starter:

Shurmur said he’s not scapegoating Manning by any means, it falls on everyone in Shurmur’s eyes. Additionally, having a veteran presence in Manning can help Jones in his development as the main guy in New York.

The Bucs seem to be fairing just fine without Gerald McCoy and Kwon Alexander. Last season, Tampa Bay averaged the sixth-most yards allowed with almost 384 per game. Right now they are giving up about 304 under Todd Bowles. That’s good for 8th best in the NFL.

"I know he's gonna come out with a lot of energy, ready to prove to everybody that they made the right decision."@MOOCHIE048 is ready to welcome Daniel Jones to the league this Sunday in @Giants vs @Buccaneers. pic.twitter.com/TBRPaDozER

However, that defense will be tested this weekend by the second-leading rusher in the league, and monster running back, Saquon Barkley. Now with a rookie quarterback, expect the touches for the second-year man out of Penn State to see an increased workload.

And to Arians, Barkley is nothing like the back his team faced last week in Christian McCaffrey. “They’re on different planets,” were the words he specifically used noting Barkley’s advantage in strength, size and speed.

The defense will also be without rookie linebacker Devin White. He’ll be held out with an MCL sprain he suffered against the Panthers on Thursday night.

The Giants and Buccaneers are kicking off at 4:05 p.m. ET on Sunday.