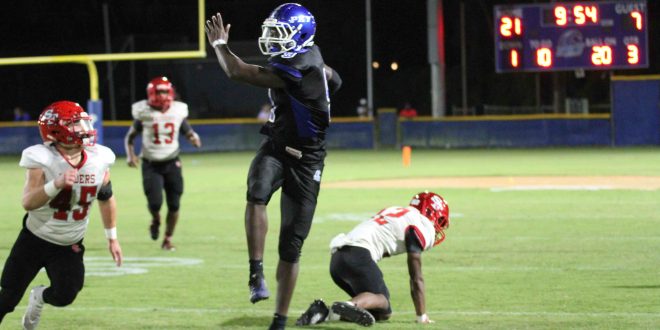 Aaron Small lands his jump, just before Anthony Hunt knocks him into the P.K. sideline.

Just before being knocked out of bounds, quarterback Aaron Small for P.K. Yonge took flight. The sophomore spent the majority of the game running the ball alongside his three running backs. He even caught air as he hurdled over Cortavis Evans from the Raiders.

The PK Yonge Blue Wave spent the majority of their offensive time utilizing running plays. “My offensive coordinator is a run-first guy,” coach Marcus McDonald said. “He always says, if I can run the ball a hundred times a game, I’d run it a hundred and one. I love that; we want to run the ball and kill the clock and play good defense. That is what wins games.”

P.K. Yonge’s first touchdown of the evening was scored on a 30 yard run by Aaron Small Jr., preceded by several runs by his teammates. Running backs were in constant rotation throughout the game: Taylor Kendrick and Isaiah Wilcox traded in and out to push more yards. “With their defense, we’ve been watching film a lot,” Small said. “We saw that they give up the run, so we chose to run it more.”

Santa Fe had double the turnovers of P.K., one of which resulted in a touchdown for Jacari Byrd. “We force turnovers in practice. That is is something that we can definitely practice with a turn over-circuit,” McDonald said. However, the Blue Wave’s offense was not without flaws as Small threw two interceptions, which allowed the Raiders to almost tie the game. “We had two interceptions,” McDonald said.  “And that just comes from being more accurate in the reads and with the placement of the ball.”

From this interception, came the possession opportunity that allowed Small to fire a pass to Jacobi Byrd. This gave Blue Wave a 21-0 lead by the end of the first half.

Kickoff for the second half was immediately followed by a touchdown from Jeremiah Crews, who ran the ball back 70 yards for the Raiders. The following two possessions by the Blue Wave resulted in the two turnovers thrown by Small.

Balin Strickland caught the second interception, placing Santa Fe on the 38-yard line.  A series of penalties pushed back the Raiders, giving quarterback Deron Reid the opportunity to launch a pass to wide receiver Cortavis Evans for a half-field touchdown with 7:19 left in the game.

After a missed field goal attempt by the Blue Wave, Santa Fe got the ball back with under two minutes to go. The Raiders were unable to advance past mid-field before time expired and P.K. Yonge won 21-14.

None of the opportunities that P.K. Yonge had could have been possible without the strength of their offense and defensive line. In spite of being a younger group with no seniors, the line has been key component of the Blue Wave for this game, as well as their previous game against Eastside. “[The defensive lines] they just give it a hundred and ten percent in practice,” said senior Michael Quarterman said. “It shows on the field.”

Rylee is a fourth year journalism major with a specialization in sports and media at the University of Florida College of Journalism and Communications.
Previous Jacarree Kelly’s Four Scores Not Enough as Oak Hall Falls to Evangelical Christian
Next Miscues Haunt Gainesville Again in Loss to North Marion

The high school football regular season has come to an end. And tonight, numerous teams …