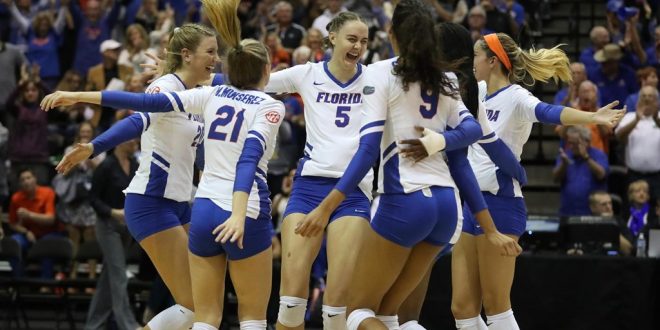 The Florida Gators volleyball team went undefeated in the Gators Invitational after beating Louisiana in a three-set match.

On Friday, the Gators opened up the tournament with a sweep over Liberty. Middle blocker Rachel Kramer recorded 12 kills and four blocks against the Flames.

Florida combined for a total of 43 kills and recorded a .302 team hitting percentage. Holly Carlton led the Florida offense against Louisiana, tallying a total 11 kills.

Defensively, the Gators were led by Kramer with four blocks. Additionally, Marlie Monserez and Mia Sokolowski added three blocks each against the Ragin’ Cajuns.

In the first set, the Gators started out with an early 4-2 lead. Louisiana then tied things up at 8-8 with a kill from Dree’Ana Abram.

A kill from Hammons put Florida up 12-10. Florida would maintain their lead, winning 25-15.

In the third set, Florida took an early lead before the Ragin’ Cajuns tied the set at 7-7. Mia Sokolowski came up big for Florida in the third set, recording three kills and three blocks

Florida will begin SEC conference play on Friday, Sept. 27 against the Auburn Tigers. You can view the game live on the SEC Network or listen live on ESPN 98.1 FM/850 AM WRUF.