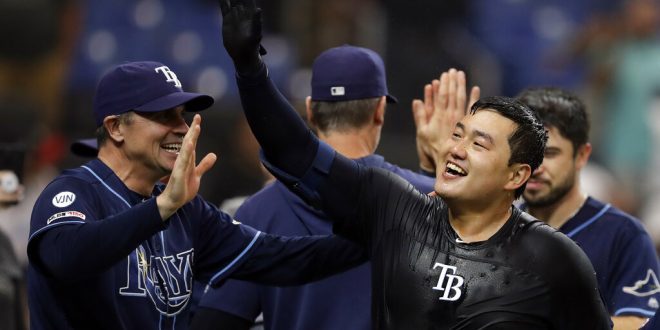 The Rays defeated the AL East-leading New York Yankees 2-1 in walk-off fashion Tuesday night. In the bottom of the 12th inning, Ji-Man Choi hit a solo shot to left field to end the game and continue the Rays’ hopes of clinching an AL wild card spot.

The theme of the game was solid pitching from both teams. Well, that and the long ball. All three runs in the game came via solo home runs.

Yonny Chirinos started on the mound for the Rays. The only hit he allowed in his three innings pitched ended up being the only run the Yankees would score. Cameron Maybin hit his 10th homer of the season in the top of the third to give his team an early lead. With that home run, the Yankees now have the most players in MLB history with 10+ long balls in a season (14).

After Chirinos’s exit, the Rays called on eight different members of the bullpen. They’d go on to allow six hits, one walk and strike out 13 in the remaining nine innings.

The Rays pitchers weren’t the only ones dealing. For the Yankees, starting pitcher Jordan Montgomery gave up three hits and struck out three in his two innings on the mound. One of his strikeouts came against Choi, who left runners on second and third in the top of the first with two outs. However, he’d redeem himself later.

From there, in the bottom of the fourth, CC Sabathia made his first career regular-season relief appearance after 560 career starts. He completed his only inning by retiring all three batters, striking out two.

In the bottom of the fifth inning, Kevin Kiermaier hit a shot to right field to tie the score at one run apiece. Seven innings later, Choi would hit his walk-off home run to win it.

The Rays have just four games remaining in the regular season to clinch their spot in the AL wild card. Tonight, the Rays will face the Yankees at 7:10 p.m. before finishing off the season with a three-game series against the Blue Jays.

As of now, the three teams vying for the two wild card spots are split by just one game. The Oakland Athletics lead the Rays by just half of a game. On the outside looking in are the Cleveland Indians, who trail the Rays by half of a game.

It’s important to note that the A’s and Indians each have five games remaining on their schedules. Meanwhile, as stated above, the Rays have four more games.

The Rays and Yankees will finish up their series tonight at 7:10 p.m. Tune in at 6:30 for live coverage ahead of the first pitch.