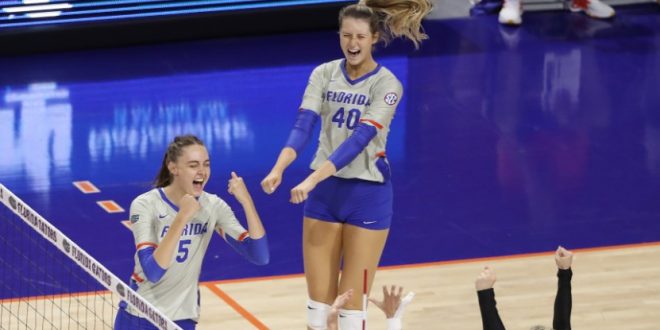 The No. 12 Florida Gators volleyball team completed their first weekend of SEC competition with a four-set victory over the Georgia Bulldogs.

In the opening set, Florida struggled to find an offensive rhythm. Georgia quickly took advantage of the opportunity, taking a 14-9 lead early on.

Georgia continued to gain momentum and found themselves up 23-14. Down by seven, the Gators clawed their way back to cut Georgia’s lead to three, 20-23.

Florida’s Thayer Hall led the Gators with four kills and six digs in the first set.

The Gator’s comeback ended with the Bulldogs taking the first set 25-22. Evans, a freshman, led Georgia with six kills in the first set.

The second set started out point for point before Florida jumped out to a 10-8 lead with a kill from Paige Hammons.

The offensive momentum shifted completely to the Gators, who held the lead for the remainder of the second set.

Georgia began a comeback of their own late in the second set. The Bulldogs slashed the Gators lead to 19-17.

Florida regained the momentum with a block from Carlton, putting Florida up 20-17.

With the match tied 1-1, the Georgia defense helped the Bulldogs take a 12-6 lead over the Gators. Blocks from middle blocker Sage Naves and setter Meghan Donovan contributed to the Bulldog’s lead.

Naves finished the match with a total of four kills.

The momentum stayed in favor of the Bulldogs as they extended their lead to seven.

The third set included another attempt at a comeback for the Gators. This time it would prove successful.

Florida managed to cut the Bulldogs lead to just one with a block from Carlton.

With the set tied 23-23, a kill from Carlton put the Gators up by one.

A block from Kramer and setter Marlie Monserez gave Florida the 25-23 victory.

Georgia again took an early 6-4 lead over Florida in the fourth set. A kill from Hall tied the set at 10-10.

A kill from Carlton gave Florida an 11-10 lead over the Bulldogs. The Gators maintained a steady lead throughout the fourth set.

Florida will have a week to prepare for the No. 16 Kentucky Wildcats. The Gators will face their first conference opponent on the road next Sunday when they travel to Lexington.

You can listen to live coverage of Florida’s matchup against Kentucky on ESPN 98.1 FM/850 AM WRUF. 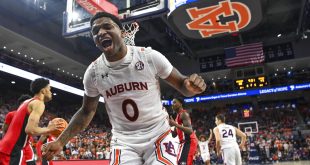