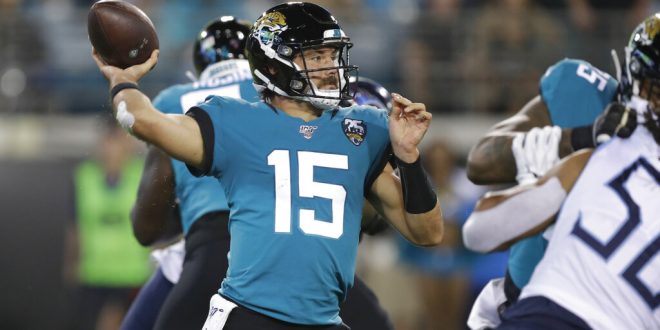 Jacksonville Jaguars quarterback Gardner Minshew II (15) throws a pass against the Tennessee Titans during the first half of an NFL football game Thursday, Sept. 19, 2019, in Jacksonville, Fla. (AP Photo/Chris O'Meara)

The Jacksonville Jaguars got their second win of the season after defeating the Denver Broncos Sunday night 26-24. The game featured a comeback from the Jaguars after trailing entering the second half of the game.

The Jaguars entered halftime trailing 17-6. They came out of the break with a vengeance, outscoring the Broncos 20-7 in just the second half. Jaguars quarterback Gardner Minshew II took full command of the game. He threw for 213 yards and two touchdowns. Minshew also helped the Jags get close to the red zone to get the field goals they needed.

Minshew said his team wasn’t “going to freak out” when they were down:

The game also featured a career-high in rushing yards by Jaguars’ running back Leonard Fournette. He rushed for 225 yards, making him the second player in franchise history to rush for 200+ yards in one game.

The Jaguars are now 2-2 this season while the Broncos are still fighting to get their first win.

The Denver Broncos got on the board first with a 25-yard touchdown pass from Joe Flacco to Noah Fant. The Jags responded with a field goal. The Broncos tacked on 10 more points in the second quarter while the Jaguars were struggling to score. Jags’ kicker Josh Lambo hit a 40-yard field goal with eight seconds left in the half to enter the break down by 11.

However, being down did not make the Jaguars lose hope.

The Broncos threatened the Jaguars’ victory in the fourth quarter when Courtland Sutton hauled in an eight-yard score with just 1:32 left in the game. Down by one point, Minshew and the rest of the Jaguars’ offense moved the ball into Denver territory.

It all came down to the final four seconds of the game. The Jaguars decided to go for the field goal. The Jacksonville victory was sealed by a 33-yard field goal by Josh Lambo.

As for the Broncos, quarterback Joe Flacco, running back Phillip Lindsay and wide receiver Emmanuel Sanders all had solid outings. Flacco threw for 303 yards and three touchdowns. Lindsay rushed for 53 yards on nine attempts. Sanders had five receptions for 104 yards.

The Jaguars will be back in action next Sunday when they face the Carolina Panthers at 1:00 pm.

Camila is a senior at the University of Florida, who served as a beat writer for the women's basketball team from 2019 until the 2021 season. She was also a beat writer for the Gators football team during the 2020 season. Camila is also WUFT's news director as well as a sports reporter/anchor.
@CamilaMaffuz
Previous Florida Volleyball Defeats Georgia in First Weekend of SEC play
Next Dolphins Fall to Chargers for Fourth Straight Loss